I have seen Yellow-bellied Marmots around Keystone, Hanna Road near the Cheyenne Crossing, and Deadwood. They are always near large rocks with plenty of grasses nearby. They like to perch themselves on the rocks to keep an eye out for predators, and to relax in the warm sun. I assume they also have burrows among the rocks where they retreat when something approaches. I took the photos below of a Yellow-bellied Marmot in Deadwood a few days after a late May snow storm, it’s fur was still a little wet. 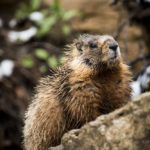 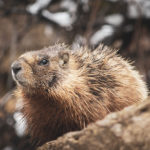