I spent a quiet Sunday morning meandering around the little town of Whitewood, SD taking photos. The townsfolk were just starting to stir, a few waves and a good morning. A church bell started to ring breaking the silence. I felt like I was in a Terry Redlin painting.

On Thanksgiving Day in 1887, the Pioneer Townsite Company made available Whitewood’s first business and residential lots. The Fremont, Elkhorn, and Missouri Valley railroad extended its line north from Rapid City that year, temporarily making Whitewood the end of the line. A post office had been established in June 1877, and the town incorporated on May 12, 1888.

The railroad bypassed well-established Crook City by a couple miles. Many of those who originally bought Whitewood lots were Crook City residents ready to abandon the older town in hopes of finding business profits stemming from rail service. Whitewood remained the line’s end for three years and prospered as a shipping point for locally produced livestock, wool, fruit, and milled grain.

According to an early history, “The town is nestled among the foothills of the great system of high altitude and is thus afforded a fine protection from the extremities of winter. There are many strong inducements to home-seekers to seek a location either in Whitewood for business or in the vicinity for the advantages in farming and grazing.” Whitewood was also where people from across a wide rural region came to collect shipped parcels, greet family and friends who arrived by train, or to ride the rails themselves. Read more on the Black Hills Knowledge Network website.

Did you know that there are two sides to every story….?

In the beginning, Whitewood was made up of a few buildings. A few of those buildings were a Methodist church, Lutheran church,  & Grimsbo Hall which was purchased by Albert Grimsbo. In Whitewood’s early years of incorporation it was known as the “breadbasket” because of its abundance of fruit and vegetable gardens made by Whitewood residents. 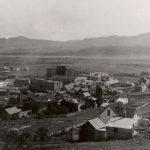 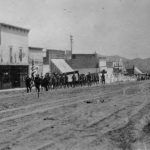 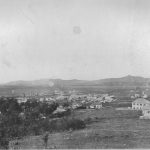 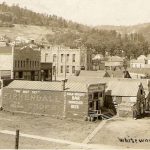 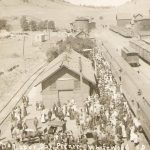