When the Story Comes True by Shauna Letellier

It was a story I’d heard all my life, or a version of it anyway. Yesterday, it came true.

My grandpa, the same one I wrote about last summer, who’s systematic prayer life explains a lot about my own life, was a storyteller extraordinaire. Besides that, he had learned his mother’s tried and true play-it-by-ear piano techniques—major and minor chords, the trilling of an octave, and a jolly be-bopping melody–and when he combined the two, it was a grand performance.

But his performances were limited to family rooms where wide-eyed grandchildren stood by listening to him spin a yarn where we were the heroes of the adventure. In his stories we made wise decisions. We attempted courageous endeavors, and in every episode we saved someone or rescued something.

I’m not sure my grandpa could have taught a class on the elements of a narrative with words like, “inciting incident,” “forward action,” “conflict,” or “resolution.” But the great thing about storytelling is that you don’t have to know what the parts are called, you just have to know how to use them. My grandpa was a master.

On our walk we’d come upon what writing instructors would call the “problem,” but Grandpa usually called it an injured animal.

He’d play the bouncing tune on the piano where you could feel yourself skipping to the beat when suddenly, he’d bang out three ominous chords. Dun-dun-duuun!

We’d jump, and the three strolling heroes would hear or see something alarming. Often it was an injured rabbit, which we would carry home to mom and beg her to help us nurse it back to health. Sometimes it was a nest of eggs fallen from a pine, or a mallard with a broken wing.

Occasionally, we’d accidentally stump him with questions, “But Grandpa, if I touch the nest the mamma bird won’t come back to her babies!” He’d quickly help us imagine that we’d brought gloves or that we could certainly maneuver a nest back onto a branch with sticks. We believed him.

He always included an element of urgency, too. It was almost evening. We were supposed to be home for supper. Rain clouds were rolling in. Even with the impending doom of darkness, storms or a suffering critter, he’d tap out a music-box melody as he convinced us that our fictional selves knew exactly how to splint the foot of a cottontail or hand-feed a robin.

In the end, the animal always healed, and I always found myself with a little lump in my throat as he described us releasing the restored animal into the wild.

When I walk in the mornings, I am regularly startled (see also, scared half to death!) by unseen animals crouched over nests or hidden in brush, until, unbeknownst to me, I get too close and they dash through the weeds or flutter from a branch. Pheasants make quite a racket when they take off, and in the stillness of a morning, it always sends my heart into my throat.

Yesterday, on my walk down to the lake, I heard the characteristic thumping of pheasant wings. Over and over the wings beat, but no bird emerged from the ditch. As I approached the roadside commotion, I saw a hen, scared by my closeness, but unable to take flight. I thought maybe she was trying to scare me away from chicks. But as I came closer I could see she was pinned down.

Our road had recently been resurfaced and rolls of straw stuffed into a plastic netting had been laid along the roadside to prevent washout. She had become tangled inside the straw-stuffed net. Her head and neck stuck through a tear in the netting, and with great effort she could flap her wings, but they were trapped inside the net. 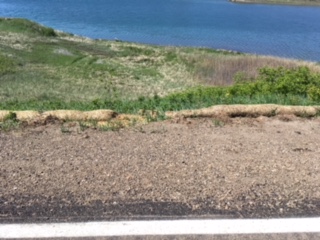 I had the strangest sense of deja-vu. I have been here before. At age seven, I had walked an imaginary road with my siblings. At age 43, I was getting exercise along a road recently resurfaced by the state. When I came upon a problem, I knew what to do.

The plastic netting was sturdier than the bags that hold citrus fruit, and I had no knife. I thought I may need to bite through the netting, which involved some risk to my health. Bird Flu and Histoplasmosis for starters. Certainly I wanted to rescue the bird, but when it comes to wildlife in real life, I have my limits.  I resolved not to put my lips on her feathers. I don’t think grandpa would have advised it, and I wonder how he’d have solved the conundrum.  Most likely my brother would have remembered his pocket knife.

Unfortunately, my brother and his pocket knife were in Nebraska.

Eventually I ripped the net with my fingers and pulled it away, but she just sat there. Her wings worked, but too many furious efforts at flying away had left her despondent, and I’m sure I terrified her with my humanity. I lifted her a bit, and the instant she felt free, she flew. 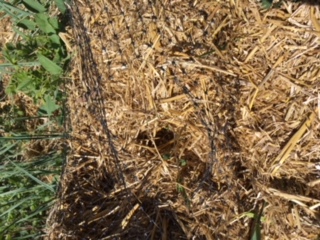 The netting and the straw. Admittedly, its not a great photo.

She squawked in her distinctive pheasant language. I marveled that the story ended just as grandpa had always said. The rabbit turned around and wiggled his ears or the bird flew away and dipped one wing as if waving. And somehow, we animal-whisperers could translate their gestures.

The Power of Story

There was a time when I poo-pooed storytelling. It was just made up, after all. Untrue. The fabrications of wistful writers. A dear friend reminded me that “Uncle Tom’s Cabin” was “just a story,” that changed a nation. It’s been reported that when Abraham Lincoln met Harriett Beecher Stowe, he greeted her by saying, “So you’re the little woman who started this great war.” The veracity of his greeting is debated, but the point is stated. Stories are powerful.

To his original listeners, steeped in tradition and pride, his stories were preposterous. Ethnic and religious divisions and hostility were no less volatile in Jesus’ day than they are in ours. To his own people group, Jesus once told a story of two upstanding leaders who turned a blind eye to a badly injured neighbor.  As the victim lay there bleeding, naked, and dying, a final character arrived on the scene. A despised enemy–a villain who would have elicited a collective groan from Jesus’ audience. But the villain didn’t finish-off the victim with a kick to the head as they expected. The character everyone expected to hate knelt beside the victim, bandaged his wounds, transported him via donkey to a shelter where the man could recover. The “villain” paid for the future expenses and promised to check in again. (See Luke 10:25-37)

Since we are so removed from that time and culture, we may miss the shocking indictment Jesus made to his own people: Your enemies demonstrate love for needy neighbors while you debate about who you’re obligated to care for. Jesus’ story taught his listeners, and us, what to do when we come upon a person in need–even if we don’t like that person. Even if, under normal circumstances we’d be considered enemies.

Our distance from the original setting also allows us to see Jesus weaving himself and his mission into the tale. He came from another place–a kingdom that’s not of this world. Though individuals loved him, a nation despised him. He came to rescue people who acknowledged their desperate need for his saving ministrations–forgiveness, undeserved favor, and permanent placement in his family. He has paid with his life for their recovery and their future spiritual well-being. He deposited his Holy Spirit inside believers to provide for our ongoing needs.

Jesus tucked his real-life mission into a fiction story, but it was no fairy tale. It was and is true. Though there are days when it seems a distant and intangible dream, it is a reality. And as you walk with him, you’ll come to realize that not only does his parable help us know what to do, it has already come true.