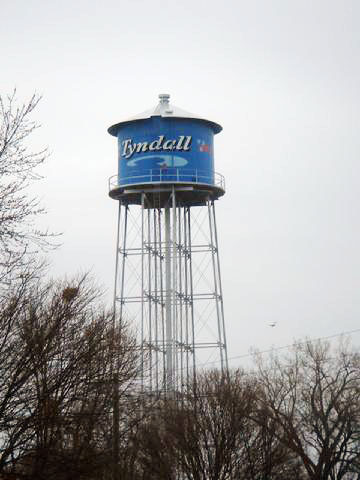 When South Dakota was officially organized as a territory by Congress in March 1861, the site of Tyndall was just part of the great rolling prairie. As a town it came into being when the railroad came through the county. The first building was the depot and the first freight shipment was a box of rabbits, weight 100 pounds, shipped by Alois Zienert to Portage, Wisc. M.E. Talcott, agent for the Milwaukee railway, issued the receipt which was dated Dec. 9,1879.

However, previous to that time, Dan Currier, a pioneer of imagination, had moved into the vicinity at the first signs of the building of the railroad, and built his home and store on the very spot where he thought the railroad ties would be placed, four miles west of Tyndall on Emmanuel Creek. But the railroad missed Danbury when it came through so Mr. Currier put his buildings on wheels, and moved them to the railroad. He then proceeded to survey and plat the town site, located near the geographical center of the county at the junction of the Running Water and Charles Mix County branch.

Tyndall received its name from Oregon Richmond, the son of an early settler of Bon Homme. Oregon, had studied to be a scientist and physician, and as a result of that study named the new town after John Tyndall, the British scientist, who had toured the U.S. in 1872. There is no other town in the United States with the same name.

The county seat moved from Bon Homme to Tyndall in 1885 after Tyndall citizens contributed $6,000 to build a Courthouse.

The first school in Tyndall was held in a building about 16×20 owned by Martin Roose and located on the lot now occupied by the apartment house, which was formerly a part of the old Good Samaritan home. The first teacher was America Rounds (later Mrs. J.P. Serr), there were about 15 pupils, the eldest of whom was Mattie Miller, and the only visitor recorded during the term was F.A. Morgan, Tyndall business-man, educator, golden-tongued orator. After one season this building was found to be too small, and was moved to Main Street by the owner to be used for a grocery store. Another frame structure was built, this time on the present school grounds, which had to be reached from the east by boats, since the land between the school and the next two streets to the east was a lake bed. That same year a high boardwalk was built so that boat transportation was no longer necessary. Before long this school also proved too small and certain grades were held in different places, among them the present funeral home. However in 1888, when the enrollment reached one hundred, the people decided that a new school must be built and soon the brick school came into being. Later this was destroyed by fire, (in 1929) and replaced with another.

The beautiful Carnegie library was built in 1917 and was made possible with a donation of $7000.00. The rest room in the basement is still used frequently for many small group gatherings. The city council proceedings of April 28,1922 say simply that a bid of $25,000 was awarded to Harry Velten of Sioux Falls for auditorium. Shortly a committee made up of a representative from the city council, Mrs. Helen Scoblic of the Tyndall Improvement Association, Mr. Eads of the American Legion, and Mr. Schuett of the Commercial Club met to fix auditorium charges.

Much of the information we used for this page was gathered and put into publication by Maxine Schuurmans-Kinsley. The Tyndall Website committee, and all the citizens of Tyndall would like to thank Maxine for her hard work and dedication to publish these great works on the history of Tyndall.