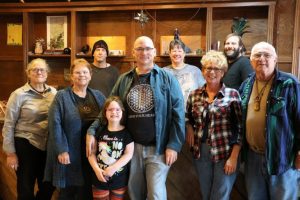 We are a family run business, with 5 out of 8 employees being immediate family.

What are Tensor Rings?

Within a Tensor Ring is an infinite source of energy that is neither electric nor magnetic with an output that is beneficial and healing to all life forms. It is a superconductor that neutralizes magnetic fields, bringing coherency to chaos, and easily stabilizes and equalizes the bio magnetic and energy fields of the body.  Tensor Fields produce a measurable gravitational effect.

Tensor Technology is noted for its use in healing, energizing and restructuring water, enhancing plant growth and vitality, beekeeping, among thousands of other observations, including connectivity to the spiritual.

Tensor Fields are science based, though go far beyond the current scope and reality of most sciences. Tensor Rings are truly an integration of Scientific and Spiritual Technologies.

On the Web at https://twistedsage.com/