Turtle Rescue and Made Some New Friends

It’s funny how things work out sometimes. This afternoon we headed out to eat and Heather spotted something in the other lane while driving. Well, if you know Heather we had to turn back and check it out. She said it looked like a bird and maybe it was injured and we ( I ) should get it off the road. We turned around and saw it was a turtle, on his back with his head and legs hanging out. I thought for sure he was dead, but when I nudged him his head and legs tucked in. There was a small puddle of blood on the road and when I turned him over I noticed his shell was cracked. He seemed to be OK otherwise, he tried biting me and was able to move all his legs. We loaded him up in the car and took him to a nice pond near the City Park where we released him. He swam off and posed for a photo. We stood there for a moment watching our turtle, when a couple came walking up and asked what we were looking at. So long story short we visited with them for about an hour, all of us telling stories and having a really nice time. So that brings me back to how things work out sometimes – if we hadn’t turned around and checked on the “bird” Heather thought she saw…we wouldn’t have saved that turtle…and we would have never met that nice couple down at the park. 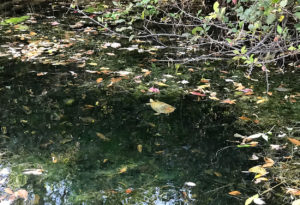 His shell is cracked and bleeding a little bit, but he/she should be fine.