The Resilience of Nature – Whitewood Creek

Whitewood Creek is a coldwater stream that flows from its headwaters in the high mountain valleys south of Deadwood to its confluence with the Belle Fourche River northeast of the city of Whitewood. The creek drains a 44,756-acre sub-watershed of the Belle Fourche River, the largest tributary of the Cheyenne River that drains east to the Missouri River.

This creek is an example of the resilience of nature to rebound after major environmental degradation. For nearly 100 years wastewater mixed with finely ground rock from area gold mines discharged directly into Whitewood and Gold Run Creeks. At least 100 million tons of gold-mill tailings and hazardous substances were discharged from the Homestake Mine. The result was a turbulent grey sludge that was seen as an unfortunate, but necessary impact to support the mining industry and economy of the area. During this period the creeks would not support plant or aquatic life.

Environmental legislation and improvements in technology led the Homestake Mine to cease disposal of tailings into Whitewood Creek in December of 1977. Almost immediately moss, algae and insect species began to slowly reappear in the creek. The current conditions of the streams and fisheries are a testament to the improved overall habitat quality.

Sixteen species of fish have been documented in Whitewood Creek including both Brown and Brook Trout that were introduced into the streams of the Black Hills. In addition to these fish species an assortment of bird, mammal, reptile, amphibian, invertebrate and plant species can be found. The most common fish include Brown Trout, Brook Trout, Mountain Suckers, Creek Chubs and Dace. According to the South Dakota Department of Game, Fish and Parks Black Hills Fishing Guide, this stretch of Whitewood Creek is home to a respectable population of Brown Trout within the City of Deadwood and the headwaters of the creek support excellent Brook Trout populations.

Whitewood Creek is used for both recreation in the Black Hills and agriculture. A portion of the Mickelson Trail winds south alongside the creek from Deadwood almost to its source in the valleys near the Rochford Ridge Road trailhead.

Public fishing access is available within the City of Deadwood at Power House Park, near the Deadwood Event Complex and from various walk-in access points along Whitewood Creek. 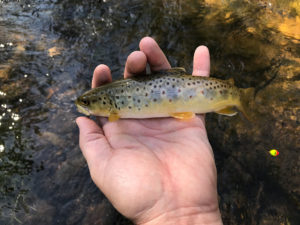