The Little Town of Cleveland

I recently hiked some of the Homestake Trail that starts at Lead and ends at the Deadwood Trailhead of the Mickelson Trail. Not a very strenuous hike, had a few steeper grades but not too bad. Beautiful views, peaceful, and nice points of interest that talk about the history.

Thank you to the Northern Hills Recreation Association for developing this wonderful trail.

Here is one of the points of interest panel displays (#6 on the Map) that the Northern Hills Recreation Association installed along the trail.

The little ‘Town’ of Cleveland

From the Spring of 1876 to 1881, the area along Whitewood Creek, from present-day Cliff Street to Sherman Street, was known as a most fashionable suburb of Deadwood Cleveland. The first settlements in Deadwood and Whitewood Gulch were always along the creeks, which supplied water, attracted wild game, and most importantly, were the source of the coveted gold. Cleveland, named for Jeff Cleveland, who operated a large corral in the area, was perhaps the most well developed, rapidly growing, and respectable mining camps in what is now Deadwood. In April of 1877, a resident wrote:

“Thinking a few items from this rapidly growing city would not be amiss, as we are anxious to be known among Black Hillers as a portion of the people, and our city a part of the coming Territory of Lincoln, I will note here that Mr. Sergeant Tisdale is our city recorder. The principal business of our city is speculation in city lots. New buildings for stores and dwellings are thickly looming up all over the town site. Of course they are not palatial residences, but vary in size from ten by twelve to six by twenty. At another time I will tell you about our mining district.”

By July of 1877, records show that several new buildings were under construction. A townsite map showed Cleveland’s Main Street as present-day Charles Street, with a gap between the Cleveland townsite and the South Deadwood townsite – an area that would later become Division Street.

In 1878 and 1879 reporters wrote, “Cleveland promises to become a populous and fashionable suburb of Deadwood. A number of our business men are putting up residences there, and others are talking of following suit…Cleveland can boast of having the neatest yards and finest gardens in the gulch. ” By 1879 property values in Cleveland were skyrocketing with some homes costing as much as $1,500 to erect.

Cleveland also had its own industry, with a mortar factory established in 1879 that could “turn out enough to plaster the whole town, inside and out.” John Otterbine’s brewery was in the town, along with the hospital, that was founded in 1879.

The regular flooding of Whitewood Creek helped provide incentive for further development on the hillsides of Cleveland. In 1878 there were three houses on what is present-day Stewart Street including one still standing at 59 Stewart Street.

In 1881 Cleveland joined with other individual camps to become the City of Deadwood. Once bulkheads contained Whitewood Creek, the level ground was fully developed and several housing additions were constructed farther up the hillside. Some of the additions around Deadwood included the Cleveland Heights, Highland Addition and Pleasant View. All except the Cleveland Heights Addition, which was hampered by steep slopes and difficult access, were rapidly developed with the arrival of the railroad. 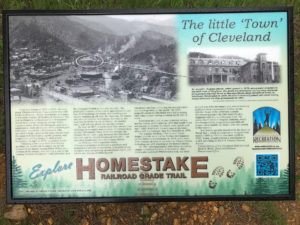 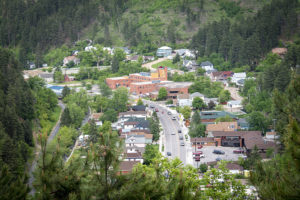 St. Joseph’s Hospital in the distance, opened in 1879, was a major structure in the little town of Cleveland.