As I was driving around this morning taking photos I passed by some ranchers unloading their horses near Belle Fourche Reservoir. I decided to pull over and see what they were up to. Turns out it was the Craig and Deb Kukuchka family getting ready to round up some cows. Their ranch, Bar 69 Angus, is located east of Belle Fourche. I visited a bit, snapped a few photos, said hello to Debbie’s 24 year old horse, Squirt. Deb showed off some of her South Dakota rancher ingenuity. To make it easier to “saddle up”, Deb used the ditch to gain some height on Squirt making the step into the stirrup less of a reach. I thought that was a great idea. 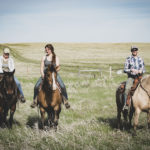 The Kukuchka’s getting ready to round up some cows. 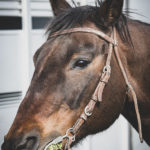 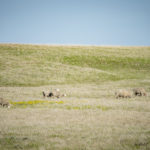 The Kukuchka’s separated the rams from the ewe’s. 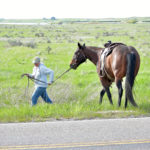 Making it easier to climb on board.

About the Craig & Deb Kukuchka

The view is magnificent as the road winds in to the Bar 69 Angus Ranch east of Belle Fourche, South Dakota. The Black Hills are the backdrop to the south, while the rugged foothills fill in the area that borders the Belle Fourche River. The ranch headquarters sits on a bench, backed up against a high plateau, and overlooks the river bottom as it winds in from the northwest and then bends to the east.

The big, red hip-roofed barn is like a jewel in the ranch yard setting, with the houses and outbuildings dwarfed by its size. Saddled horses take a break in the barn alley, and cattle lounge in the sun in the corrals. It’s calving time on the ranch and all hands are busy making sure everything runs smoothly.

Craig and Deb Kukuchka are the owners of Bar 69 Angus. They originally came from Sumatra, Montana and moved to the Belle Fourche area in 1988.

Craig and Deb met at her Dad’s bull sale. Sitz Angus bulls initially brought Craig around, but, he just kept coming back to see the pretty Vo-Ag./Home Economics. teacher. After they married, they started their own cowherd with Deb’s registered cows

To this day, all their registered cows go back to two cows of Deb’s. The registered herd holds a strong place in their hearts. “We enjoy using the best genetics and trying to produce better cattle. It’s always interesting to see each new calf crop grow up,says Deb.

Besides the help of their own family, the Kukuchkas have long been involved with a student agricultural exchange program. Young people from 18-28 years come from other countries to get experience in agriculture here in the U.S.. They work on the Bar 69 Ranch learning about sheep, cattle and crop production.

Over the years, there have been 22 students call the ranch home. Their two current students are a young woman from Germany and a young man from Brazil. “It’s been great.

We’ve learned so much about other countries all over the world. The language barrier is the only problem,” says Craig, then added with a chuckle, “There have been some interesting situations as a result of that!”

The Kukuchka ranch runs a band of around 1000 ewes, shed lambing some in the first two weeks of March, with the balance lambing in May. The sheep complement the cowherd well as they eat the weeds and forbs that the cows pass over. Pasture management is important to the family and both ranches show the positive results of that management.

The cowherd is run as one, with registered and commercial cows treated the same. They strive for cows that are easy keepers with good dispositions. “We’re raising cows to satisfy ourselves, so we don’t chase fads,” says Craig. Deb added, “They have to match their environment.”

The environment they run on at the north ranch is native grass, with rough draws, deep creeks, sagebrush and coyotes. The cows run on the north ranch most of the year, being brought home before calving, then taken back to pasture as soon after calving as the weather permits. In the winter they are run primarily on cake and grass, though during cold spells, they feed hay.

The cows fit their frame, with good depth and length, and average between 1300-1500 lbs, depending on the season. They require a good disposition as the calves are weighed and tagged at birth, and the cows are A.I.ed through natural heat detection.

They A.I. the registered cows for three weeks, using horses to gather the cows to be bred. After three weeks, the bulls are turned out, and then pulled at the end of 60 days. Heifers start calving February 1, while the cows start to calve. March 1. The cow work is done with saddle horses, which they believe make cattle that are easy to work and handle.

In the fall the calves are preconditioned, then are brought to the river ranch to wean. The calves are fed on home grown feed, with the bull calves fed a little different than the heifers. “We’ll feed a little silage some years, it just depends on what we’ve raised for feed,” says Craig.

Their annual bull sale will be held April 2nd at Belle Fourche Livestock, and many buyers come year after year for the Kukuchka’s bulls. “We have wonderful customers,” says Deb.

The Kukuchka family sees no major changes in their operation. The Angus cattle are working for them and consequently, their bulls work for other ranchers as well. Craig sums it up, “We just like raising good cattle in general. A cow’s a cow, but they still need to be good whether they’re papered or not.”

From Montana to South Dakota, Deb and Craig have brought ranching tradition with them and established themselves well. Deb says, “South Dakota has been so good to us. We have a lot of good friends and neighbors here.”

If hard work and diligence are requirement for the longevity of a ranch, the Kukuchka’s will be ranching for many years to come. It just all they’ve ever wanted to do and they do it well.