Heather and I went to Deadwood on Saturday, not to party, but to play a few slots and eat Corned Beef and Cabbage at Tin Lizzies. I took a few photos of some people that were dressed up, and got a video of a man dressed like Jesus, in a robe and sandals. Unless he was trying to look like St. Patrick maybe…Anyway he flipped me the bird so I decided not to post that video. Just watching hordes of people walking around, dressed in all sorts of different green apparel was entertaining. More so when you don’t drink and you can just focus on what is going on around you!

Heather was playing a slot and a little tiny Vietnamese lady playing a game across from her was approached by a young guy asking for a kiss on his cheek. They were playing some kind of game to see who could collect the most kisses and he pointed to the marks on his arm indicating how many kisses he collected so far. Leaning over, he kept pointing to his cheek and repeating his request for a kiss. The look on her face was priceless. I’m not sure if she really didn’t understand what he wanted, or if she was just too embarrassed. After repeated attempts he gave up and left. She jumped up and came over to Heather and I and she was talking a mile a minute all flustered about what just happened. We all had a good laugh though.

It was only about 6pm and I could only imagine what it would be like at around 10pm. The Deadwood policeman were walking up and down the street just biding their time before the green beer and liquor started to take effect. Our celebration didn’t last very long. Never won any money. We did have a few good laughs. We ate supper at Tin Lizzy’s and headed back to Spearfish safe and sound.

Saint Patrick’s Day, feast day (March 17) of St. Patrick, patron saint of Ireland. Born in Roman Britain in the late 4th century, he was kidnapped at the age of 16 and taken to Ireland as a slave. He escaped but returned about 432 to convert the Irish to Christianity. By the time of his death on March 17, 461, he had established monasteries, churches, and schools. Many legends grew up around him—for example, that he drove the snakes out of Ireland and used the shamrock to explain the Trinity. Ireland came to celebrate his day with religious services and feasts.

It was emigrants, particularly to the United States, who transformed St. Patrick’s Day into a largely secular holiday of revelry and celebration of things Irish. Cities with large numbers of Irish immigrants, who often wielded political power, staged the most extensive celebrations, which included elaborate parades. Boston held its first St. Patrick’s Day parade in 1737, followed by New York City in 1762. Since 1962 Chicago has colored its river green to mark the holiday. (Although blue was the color traditionally associated with St. Patrick, green is now commonly connected with the day.) Irish and non-Irish alike commonly participate in the “wearing of the green”—sporting an item of green clothing or a shamrock, the Irish national plant, in the lapel. Corned beef and cabbage are associated with the holiday, and even beer is sometimes dyed green to celebrate the day. Although some of these practices eventually were adopted by the Irish themselves, they did so largely for the benefit of tourists. 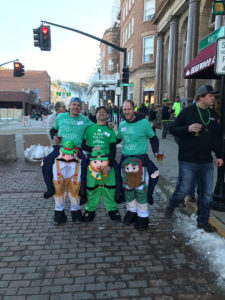 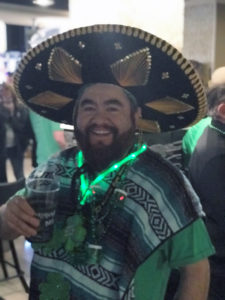