Most of the snow has melted around here, except for areas that don’t get hit by the sun. Temperature in the canyon was in the 50’s. Water temp…might need to get some boot warmers.

Although the water is getting colder by the day, the fly fishing was on fire! The likely holding areas all had trout that were on the attack. I fished from 4:30 pm to 6 pm and caught 7 or so brown trout and one rainbow. All of them were caught with my trusty strike indicator and beaded pheasant tail nymph. My fly was so beat up, I had to keep trimming off the unraveling threads, but the trout didn’t seem to care. Not very picky, but I did notice in one particular spot I saw several trout hanging around but I couldn’t get them to take the fly. After several casts I finally looked at the fly and noticed it had a small piece of weed or moss hanging off the hook, or maybe it was some thread…once I removed it, I immediately caught 3 of those trout. 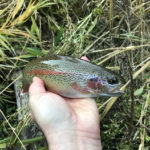 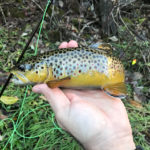