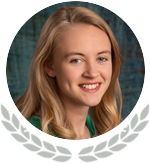 Eleanor Abraham, 18, of Brookings, South Dakota, a senior at Brookings High School, founded and chairs a community service committee at her church that has conducted monthly projects included raising money to provide 20 beds for children in need, helping to collect cold-weather gear for more than 300 families, roofing a garage for a mother and her adult daughter, and delivering meals to senior citizens. In 2018, Eleanor attended a national church youth gathering in Houston, where part of her time was spent doing yard work for elderly people in a low-income neighborhood. “I was struck by how such a small effort on my part could make such a huge difference in someone else’s life,” said Eleanor.

When she returned home, she asked her pastor if she could form an “action team” of volunteers at church that would “connect people with time, talents, and monetary gifts to assist others.” Soon after, the “Face of Grace” committee was formed with the mission of performing one or more monthly acts of kindness. Eleanor’s committee, comprised of both students and adults, meets once a month to assess needs in the community and decide on projects to address those needs. One such project was a breakfast fundraiser for a nonprofit that builds and delivers beds for children who don’t have a comfortable place to sleep. Eleanor and her team raised $3,000, enough to purchase materials to build 20 beds. They then built, delivered and set up the beds in homes around their community. 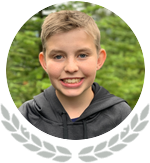 Bennett Gordon, 13, of Whitewood, South Dakota, a seventh-grader at Sturgis Williams Middle School, raises awareness of the need to recycle by organizing collection and recycling drives, conducting a recycling workshop for elementary school students, and sponsoring an annual essay contest that challenges middle schoolers to envision how they can make the world a better place by recycling. Two years ago, Bennett went on a tour of the local landfill and was shocked by what he saw. “I remember the horrible smell of the garbage from the parking lot,” he said. “But once inside, what made my jaw drop most was seeing the mountains of trash.” During the tour, Bennett learned that 75 percent of the items people throw away can be recycled. But, in fact, only about 30 percent are. He went home determined to change that.

He started small, setting up a recycling bin for his family along with a donation box, so household items and clothing could be given away instead of trashed. And he began researching what others were doing for the planet. This gave him the confidence, he said, to initiate a project at school. His first step was to collect 200 pairs of gently used shoes to be reused by people in need. He then set up a Facebook page (named “Recycle: There is No Planet B”) to share tips for where and how to recycle or reuse everything from eyeglasses to electronics. He also hosted a statewide essay contest, coordinated a recycling workshop for elementary school students in a local after-school program, and led a drive that collected 150 books to set up small libraries in area laundromats.

Mara Andersen, 17, of Freeman, South Dakota, a senior at Freeman High School, co-founded and organizes the annual “Freeman Triathlon” and 5K run/walk; along with advertising the event, she has helped secure business sponsorships, determine the race route, advertise the event, register participants and recruit volunteers. Mara started the triathlon five years ago with a friend, when they were unable to find one that accepted child participants; the race has since raised more than $8,000 to benefit a variety of causes.

Korbin Leddy, 16, of Stockholm, South Dakota, a member of Grant County 4-H and a sophomore at Milbank High School, is dedicated to helping people struggling with food insecurity; along with organizing an annual food drive at his school, he donated more than 770 pounds of surplus garden produce to his local food pantry, and helped pack both healthy student backpack meals and more than 30,000 fortified rice meals for Native American reservations and areas around the world affected by disasters. Korbin has also delivered tomato plants to nursing homes to help give seniors access to fresh vegetables.

About The Prudential Spirit of Community Awards

Created in 1995 by Prudential and the National Association of Secondary School Principals (NASSP), the program honors middle level and high school students for outstanding service to others at the local, state and national level.

Thus far, it has recognized more than 140,000 young people who’ve made a difference – and inspired countless others to consider how they might contribute to their communities.

The Spirit of Community Awards program also honors youth volunteers in countries outside the U.S. where Prudential has a significant presence: Japan, Taiwan, Ireland, India, China and Brazil.

There were 102 teen volunteer winners selected throughout the U.S. in this year’s Prudential Spirit of Community Awards. Here are the remarkable stories of teens from all 50 states https://spirit.prudential.com/honorees/state.

This website uses cookies to improve your experience while you navigate through the website. Out of these, the cookies that are categorized as necessary are stored on your browser as they are essential for the working of basic functionalities of the website. We also use third-party cookies that help us analyze and understand how you use this website. These cookies will be stored in your browser only with your consent. You also have the option to opt-out of these cookies. But opting out of some of these cookies may affect your browsing experience.
Necessary Always Enabled
Necessary cookies are absolutely essential for the website to function properly. This category only includes cookies that ensures basic functionalities and security features of the website. These cookies do not store any personal information.
Non-necessary
Any cookies that may not be particularly necessary for the website to function and is used specifically to collect user personal data via analytics, ads, other embedded contents are termed as non-necessary cookies. It is mandatory to procure user consent prior to running these cookies on your website.
SAVE & ACCEPT
Loading Comments...