17 species of snakes make their home in South Dakota. The only venomous variety is of course the Prairie Rattlesnake, with it’s distinct rattle at the end of its tail. I talked to a rancher near Belle Fourche and he told me that some Rattlesnakes he has encountered on his property didn’t have a rattle, which of course makes them more dangerous if you happen to come near one. Typically they will rattle their tail when they feel threatened. Here is an interesting article about that by NPR “Some Rattlesnakes Losing Their Warning In S. Dakota”.

So far on my journeys around Western South Dakota taking photos I have only come across a Bull Snake, and a few varieties of Garter Snakes. Living in Pierre for 20 years I did come across a Prairie Rattlesnakes. Thankfully it was while it was crossing a remote gravel road so we stopped and took a look from a safe distance. Sort of funny how when we approached, it backed itself into the grassy ditch and then it started to rattle. I imagine it was saying “Watch out dummy, I don’t want trouble but don’t push it”.

When out taking photos or fly fishing I have seen two types of Garter Snakes. The Western Plains Garter Snake and the Wandering Garter Snake. The Western Plains Garter is everywhere. I see a couple of them every time I go out walking to take photos. Anywhere there is tall grass, weeds, brush or near water there is always at least one going about its business. The house we rented when we first moved to Spearfish has a block landscape retaining wall around the south side of the house. This spring, when the sun warmed up the blocks there were Garter snakes laying out sunning themselves. Yes, snakes as in plural. It was a little creepy, but I can just imagine all the bugs and other pests that they are eating around the outside of the house.

The other Garter snake I have seen on occasion is the Wandering Garter Snake. I had to do some research on this one, because they look like a Western Plains Garter, but are a dull brown color. In Deadwood along Whitewood Creek I have seen a few that are very dark, almost black colored. I had just assumed they were the same snakes, just taking on a different color to blend in with the rocky terrain in the Black Hills. I found on the Reptile Gardens website a page dedicated to the different types of snakes found in South Dakota. You can check it out here. There are some myths and legends that they talk about too. 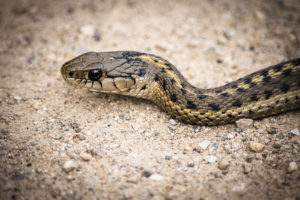 Closeup of a Wandering Garter Snake 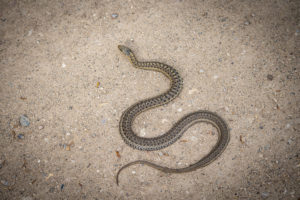 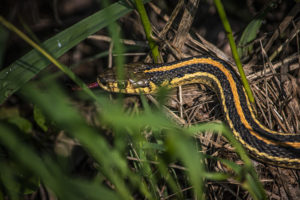 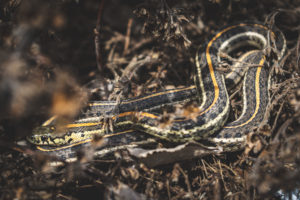