Preacher Smith’s resting spot is located at Mt. Moriah cemetery in Deadwood. Along Highway 85 heading into Deadwood the Society of Black Hills Pioneers erected a monument on August 20, 1914 at the approximate location where Preacher Smith’s body was discovered on the morning of August 20, 1876.

The crowded dirt Main Street in Deadwood was his church, a fact later pointed out by Captain Gardner:

In the years past I have noted in the press many statements regarding incidents connected with the man known as Preacher Smith. Most of them are pure romance. … how he used to go into the saloons and pray are pure fiction. I never saw him in a saloon, and I am sure he never was. He preached frequently in Deadwood, generally in front of Bent and Deetken’s drug store or in front of my store. … in those days the town had 3,000 to 4,000 people, located mostly on one street, and he had no trouble in securing an audience. He was a man about 6 feet tall, with a fine physique and I should say 40 years old. He was very quiet and unassuming in manner. I know nothing of his past life, as he never volunteered to tell me and it was not wise in those days to inquire too closely into a man’s antecedents.

It becomes my painful duty to inform you that Rev. H. Weston Smith was killed by the Indians yesterday (Sunday) a short distance from this place. He had an appointment to preach here in the afternoon, and was on his way from Crook City when a band of Indians overtook him and shot him. His body was not mutilated in any way, and was found in the road a short time after the hellish deed had been done. His death was instantaneous as he was shot through the heart. His funeral occurred today from his home in this town. Everything was done by kind hands, that was possible under the circumstances, and a Christian burial given him. I was not personally acquainted with Mr. Smith, but knew him by reputation, as an earnest worker in his Master’s Vineyard. He has preached here on several occasions, and was the only minister in the Hills. He died in the harness and his memory will be always with those who knew him. A letter from you which I found in his home causes me to convey this sad intelligence to you. 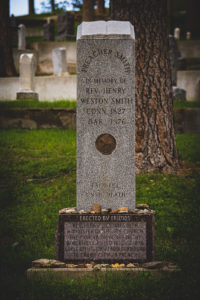 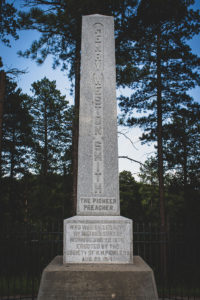 Below is a very good read about Preacher Smith – Henry Weston Smith.