Geisler, naturally, expects a big crowd for the event.

History of the Pioneer Auto Show 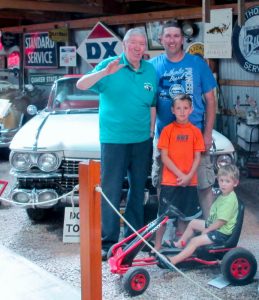 The Geisler family is a part of the history of South Dakota.

The Pioneer Auto Show was started in 1954 by AJ ‘Dick’ Geisler and his family. Since then, the Pioneer Auto Museum (as it was known back then) and Dick have been a single thought in the minds of the thousands of antique and classic car enthusiasts who have visited, and met the man with the ever-present cigar.

Dick was born on Valentines Day – the son of German immigrants. The family lived in New Ulm, Minnesota. After high school, Dick and a friend drove a Model T Ford to California taking odd jobs along the way so they could finance their trip. While on this trip, Dick met and married Vivian Peterson.

The couple settled in Pasadena, California, where their three children, Roma, John, and Dave were born. Dick opened a feed and hardware store, and despite being the height of the Great Depression, business proved successful.

In 1942, Dick, always looking for new challenges, traded his California home in for a farm in Blunt, South Dakota. The locals were amused that a ‘Dude’ from the west would come east to the Dakota’s to farm, especially since there had not been a good crop in South Dakota for years. But with good weather and the Geisler touch, he was able to produce a number of bumper crops.

In 1954, during the post war period, Dick felt the need to move again. He bought a John Deere & Chevrolet dealership in Murdo, a town located at the Junction of Hwy 16 and Hwy 83, just 80 miles from his farm in Blunt.

In 1950, Dick opened a Phillips 66 gas station. The location proved to be a busy corner. To entice travelers to stop and buy gas, Dick displayed several vintage cars in the parking area. One of the cars was a 1913 Ford Peddler’s Wagon – a classic car still on display at the famed antique auto show.

Visitors stopped, looked at the antique automobiles and filled their gas tanks. It didn’t take long to see that tourists were interested in old cars. Over the next few years, Dick kept on buying antique and vintage cars, building up a modest but interesting inventory of classic autos. By 1954, Dick and his two sons, Dave and John, had so many antique cars they decided to build a place to display them all properly. This is how the Pioneer Auto Museum began.

After Dick’s death in 1973, John ran the vintage automobile museum. Dave then took over the active management of the growing classic car attraction, which now has more than 30 buildings. The two men, working together, were a good team. The result was a continued growth and improvement of the antique displays and facilities.

Today, the high-volume Interstate 90 attraction features not only classic cars and tractors but also hundreds of other collectibles from vintage gas pumps and bicycles to antique toys.Dave greets you at the door with a big smile and cordial welcome, taking time to show customers various displays and to talk about antique cars and new times.

Dave feels that the good Lord has always been a part of his life and as you tour the Big Show you too will feel His presence. Dave Geisler has four children, daughter Vivian was born in 1959, daughter Patty in 1962, daughter Jennifer in 1964, and son David in 1967. Vivian and David have been actively involved in the day-to-day operations of the ‘Big Show’ over the years and, God willing into the third generation.