On the Road with Poseidon

Heather and I recently had lunch at Olive Garden in Rapid City with our friends Michele Kelly from Pierre and her son Bryant Kelly from Rapid City. 3 years ago Bryant adopted a kitten from the Humane Society of the Black Hills and named him Poseidon. I didn’t ask if he is named after Poseidon the Greek God, or Poseidon the luxury liner that capsized in the North Atlantic. Either one is pretty cool – adopting a pet from a shelter is even cooler. Bryant works on telecommunication towers, he hits the road traveling all across the Midwest to each job site. I know truck driver’s sometimes have small dogs as traveling companions. You remember Snowman and his dog Fred from Smokey and the Bandit? But I digress…

So recently Bryant decided Poseidon would make a great traveling companion, it was a little rough going at first. You know cats, they can be difficult sometimes. Bryant said Poseidon wasn’t a “fan of being in the truck” – In my mind I can picture Poseidon hanging upside down, his claws dug into the cab liner. So, now we know it takes a little time for some cats to get accustomed to traveling in a truck. Bryant keeps a close eye on Poseidon at the job site, but again you know cats, they love to climb things. Poseidon isn’t allowed to climb too high of course, since some of the towers Bryant works on can be up to 2000 feet tall! Poseidon just waits at the bottom waiting for his favorite “human” to come back down.

I travel all over the Midwest building, maintaining and upgrading telecommunication towers. I work mostly on Cell phone towers for carriers like Verizon, AT&T and T-Mobile. Tower range anywhere from 50′ up to 500′ depending on the area and how far they want to push the signal.

I also work on Broadcast towers. Like FM/AM radio towers and TV Towers. These range anywhere from 200′ up to 2000′ and push some major power. I’ve also installed a lot of Microwave paths which is basically the back haul of information going and coming from sites. Most of the cellular carries have Fiber ran to location which does the same thing. But for the secluded areas microwave paths is the only way to go.

I’ve had my cat Poseidon traveling with me for the last 4 months. At first he was not a fan of being in the truck but now I think he loves seeing new areas and exploring when I let him. 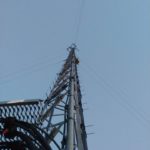 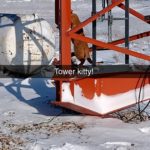 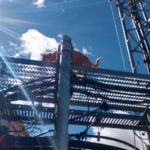