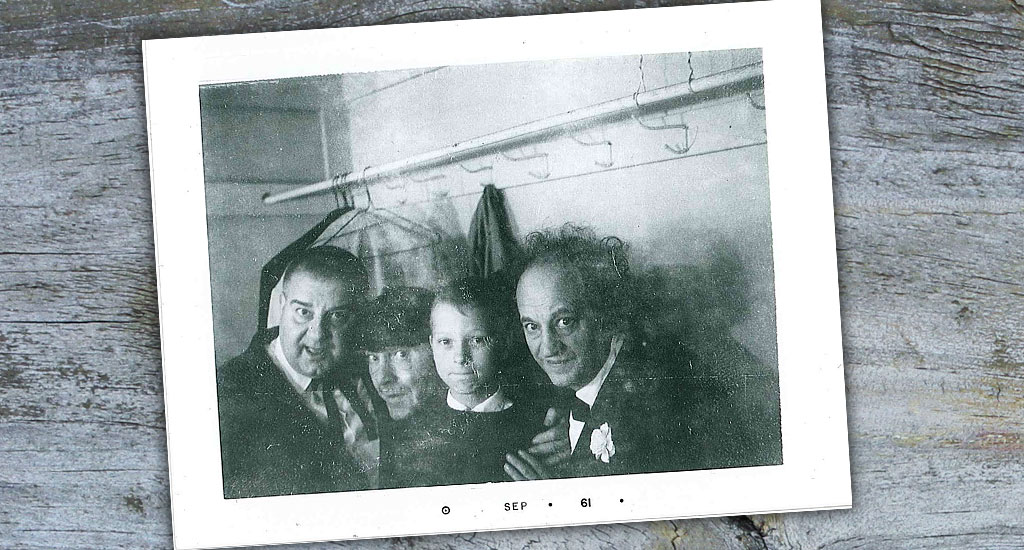 I love The Three Stooges. Turn’s out The Three Stooges were at the Mitchell Corn Palace back in 1961. After Curly Howard passed away in 1952, they were in need of a “third Stooge”. Moe Howard and Larry Fine invited Joe “Curly Joe” DeRita to join the act, which he accepted in 1958. They suggested he shave his head to look more like Curly, so he sported a crew cut that eventually became a fully shaven head. DeRita was the last Stooge to be born, the last to join the ensemble, and the last to die.

This cool story below and the post photo is from Jerry Dahmen News Director of KXRB Radio in Sioux Falls.

How I Got Exclusive Interview with The Three Stooges when I was 12!

I was 12 years old at the time and was determined to do an interview with The Three Stooges for my school paper! But, I didn’t know what it was going to take to visit with them while in South Dakota.

Instead of giving up, I figured it wouldn’t do any harm if I tried to reach them on the phone at their Mitchell hotel. But, where were they staying? That’s when I got the numbers of the hotels in Mitchell. I then made person-to-person calls for Moe Howard, the leader of The Three Stooges. I lucked out! The second hotel confirmed that Moe was registered.

The hotel operator rang the room where Moe was staying.

When a man answered the phone, I asked him if he was Moe Howard with The Three Stooges!

“Well, I would like to interview the The Three Stooges for my school newspaper.”

“That won’t be possible,” he replied. “The Three Stooges aren’t giving any interviews while in Mitchell. They are much too busy rehearsing at the Corn Palace.”

At this point, the man politely told me he had to go. But, then he asked me—“are you planning to attend the show?”

“You bet,” I said. “They are the best of the best and I wouldn’t miss seeing them for anything.”

Once I hung up the phone, I asked my dad if he would drive me from Sioux Falls to the Corn Palace in Mitchell to see The Three Stooges.

“No problem,” he told me. “But, don’t feel bad because they won’t talk to you. These guys are really popular and can’t see all their fans.”

Well, the day of the performance arrived and my parents and I were on the road.

Once we got inside the Corn Palace, I couldn’t believe all the people were there to see The Three Stooges!

Oh how I wished I could talk to them! But, half way into the show, they broke for intermission. It was then when I was shocked to hear the show’s master of ceremonies announce on the loud speaker—“Ladies and gentlemen—Will Jerry Dahmen please come to the back stage door?”

I couldn’t believe what was happening. My parents and I walked to the stage entrance. One of the show’s workers escorted us to a dressing room. When he opened the door, there they were—THE THREE STOOGES in person!

Moe told me he wanted it to be a surprise for me! I was too nervous to ask a lot of questions. But, I did tell them someday I would be on the radio!

Moe responded: “Jerry, do something that makes people feel good.” I think that’s when I began thinking about putting together a show about people going through tough times.” Thus the birth of “I Love Life!”

Before leaving the dressing room, my parents asked The Three Stooges if we could get a picture together…proof that I had really met my favorite stars!

All three surrounded me and the picture was snapped!