Before becoming a truck driver, Jay Mayes first had to meet the Federal Motor Carrier Safety Administration (FMCSA) medical physical requirements. Jay qualified and received his DOT Medical Exam and Commercial Motor Vehicle Certification. Being hard of hearing, that was Jay’s first step to becoming a truck driver – Jay’s trucking career was shifting into next gear.

In 2009, while working for Ag Service in Blunt, South Dakota, Jay got his first chance driving truck and he hasn’t looked back – “That’s when I decided I wanted to be a truck driver”. Jay’s trucking career was born, eventually taking a job hauling hay for Thieman Hay out of Colome, South Dakota in 2010. Jay built a strong business relationship with Thieman, so when the opportunity came along to buy his first truck, he bought it from Thieman. With his own truck and plenty of experience, Mayes Trucking was established in 2017 and he continues to haul for Thieman Hay, along with taking on new clients as Mayes Trucking continues to grow – “I’m not sure there is another hard of hearing or deaf truck driver that owns their own business in South Dakota”.

Jay says, “I never thought I would own a trucking company let alone trucking, because growing up I wanted to be a deputy for a sheriff’s office or a police officer. In 2004, I did become a police officer and enjoyed it – but it wasn’t my calling”.

Today, Mayes Trucking is rolling down the road hauling everything from hay, cattle, grain and feed, and general freight. Like Johnny Cash, Jay has been everywhere man. From coast to coast, and states in-between like Idaho, Kansas, Missouri, Iowa, Minnesota, Wyoming and Colorado. The highway can be lonesome for truckers, unless you have a loyal canine companion by the name of Bugs sitting in the passenger seat.

Jay also studied Diesel Technology at Southeast Technical Institute in Sioux Falls from 1999-2000, and his knowledge of diesel engines comes in handy when his truck requires maintenance work. Jay hopes to expand his business, add a few more trucks and some dedicated drivers. “I love my job, to me it’s not a job”.

Roll on eighteen-wheeler roll on 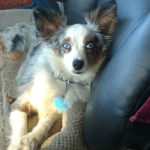 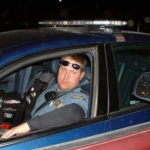 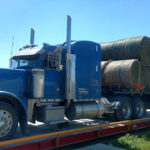