​We are a large group of families within the Tetonwan (Lakota) Nation who belong to the Sicangu (burnt thigh). Long ago we split into the Kul Wicasa Oyate (lower people) and the Heyata Wicasa Oyate (uplands people). Our Kul Wicasa ancestors favored lands where the Maka Izita Ska (White River) empties into the Mni Sose (Missouri River), while the Heyata Wicasa lived higher up towards the Paha Sapa (Black Hills). French traders on the Missouri River in the 18th century began calling us the Brûlées (burnt, scorched) and now we are the Lower Brule Sioux Tribe.

​Our homeland has no formal boundaries. For thousands of years we have lived in the grasslands and river valleys between the Rocky Mountains and the Great Lakes – in recent centuries, west from the Missouri River in present-day South Dakota to the Platte River, in Nebraska, to the Yellowstone River in Wyoming and Montana, to the edge of the forests in Minnesota south of the Great Lakes.

​Soon after the first agents of the United States government traveled through Lower Brule lands in 1804, our world drastically changed. Between 1825 and 1962, the US government forced our people to make ‘treaties’ and ‘agreements’ that resulted in the loss of most of our territory. As recently as the 1950s and 1960s, the construction of two huge dams along the Missouri River in South Dakota flooded most of our forests, hunting, fishing and gathering grounds, agricultural lands, and settlements, creating the Lake Sharpe and Lake Francis Case reservoirs.

​Lower Brule people are strong and resilient, and so we continue to protect and preserve our culture and work to return to our traditional self-sufficient way of life.

Chief Iron Nation (1815-1894) led the Lower Brule Sioux Tribe through some of its most challenging years. He worked diligently, both as a warrior and statesman, to ensure the survival of his people. Iron Nation signed the treaty to establish the Great Sioux Reservation in 1868. He has been described as a just and noble leader. 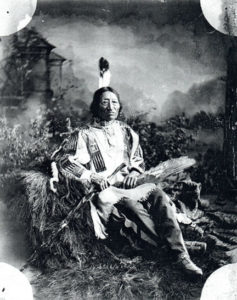 The Native American Scenic Byway crosses the Lower Brule Reservation. Following the Missouri River, the route provides stunning vistas from the crests of lofty river bluffs and views of rolling hills as it descends into the fertile river bottom.

Along the route and north of the town of Lower Brule, is the Big Bend of the Missouri River and the location of the tribe’s Narrows Historical Interpretive Area, a Scenic Byway facility.

The Big Bend is the largest natural meandering loop in any river system in the United States. It features a narrow “neck” of land, formed around a chain of hills approximately one and one-half miles wide. These hills forced the Missouri River to meander 30 miles in order to continue its flow southward. This natural landmark was widely known by the indigenous people of North America who lived and traded for thousands of years in the Missouri River Basin. In more recent history, this area became a landmark for fur trappers, frontiersmen and military personnel.

The Narrows Historical Interpretive Area is located near the area where travelers traditionally crossed the neck by land to avoid the long trip around the Bend. The interpretive area contains a Lakota tipi encampment and an Arikara earthlodge, representing the tribes that settled here over the past thousand years. Visitors who walk the Narrows Recreational Trail to the top of the hills will be rewarded with a stunning view of the entire Bend.

The tribe maintains a herd of bison in three ranges covering approximately 6,200 acres. One of these preserves, the Big Game Unit, is located near the town of Lower Brule and is also home to almost 200 elk.

The Lower Brule Department of Wildlife, Fish and Recreation is located three miles north of the town of Lower Brule. Surrounded by the tribe’s bison and elk range, the wildlife facility offers unique interpretive exhibits and displays of area wildlife and native trees, plants and grasses.

The Lower Brule Buffalo Interpretive Center is located on original tribal homelands next to the Missouri River. Hands-on exhibits, interpretive videos and special programs, and tours of the buffalo pasture offer visitors a unique educational experience. It is located on S.D. Highway 1806 seven miles southeast of Fort Pierre on the Native American Scenic Byway.

The Lower Brule Tribal Administration Building is a state-of-the-art facility, and a spectacular Tribal Council Meeting Chamber symbolizes revitalized growth and economic development, while preserving the traditions and culture of the past.

The Tribe’s Golden Buffalo Casino and Resort, located in the town of Lower Brule, offers gaming, a restaurant, a 40-room motel, a convention center and an RV park open year-round.