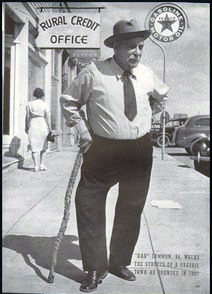 George Edward Lemmon was born at Bountiful, Utah, May 23rd 1857. He moved to Nebraska in 1866 with his parents and at the age of 13 he began the work which made up his career during a large portion of his life.

Nearly 75 years of activity on the cattle ranges of the western Great Plains from the Canadian border to Texas, the founding of this thriving city, many business enterprises and the creation and successful operation of far-flung ranch empires were crowed into his long colorful career.In the late 1870’s he came to the Black Hills, from there going to the northwestern section of South Dakota with his cattle outfits.

In the year 1902 he settled on the L-7 ranch, which was located near the present site of Lemmon. During that time land was plentiful and the L-7 leased 865,000 acres of land on the Standing Rock Reservation and enclosed it with standard three-wire fence, making it the largest fenced pasture in the world at the time.

Several years later Lemmon sold his interest in L-7, moving with the homesteaders to settle a new town after the Milwaukee Railroad had crossed the Missouri and moved westward.

On May 16, 1906 the land embraced in what is now the Original Town site of Lemmon, was scripted by Mr. Lemmon with “Santa Fe Railroad scrip” and this land was later conveyed to the Northwest Town Site Co., and by them platted in September 1907, and it was during the same time that “Tent Town”, or the beginning of this city, sprung up.

Due to the fact that Lemmon, also having in mind the route for the Milwaukee railroad from Missouri River to Lemmon when the company decided to build west, it was recommended by the vice president of the railroad that the proposed city be called “Lemmon”.

“Dad” Lemmon was one of the few remaining Texas trail drivers who made the delivery of herds from Texas to northern maturing ranges, these herds laying the foundation of the cattle industry in western South Dakota. His range life covers experiences in Wyoming, Nebraska, the Dakotas, Montana and Texas.

In 1958, Ed Lemmon was inducted into the National Cowboy Hall of Fame in Oklahoma City, Oklahoma. It honors leading figures of the early west including former President Theodore Roosevelt, Will Rogers, “Buffalo Bill” Cody and other who have answered the “Last Roundup”.

More can be learned of George Lemmon and his friendship with Theodore Roosevelt as well the town’s early history at the Grand River Museum.

The Lemmon Petrified Wood Park is the largest petrified wood park in the world. The park itself is filled with petrified wood formations, and other geological specimens of interest. The park also hosts a free museum, itself constructed out of petrified wood.

The Grand River Museum is located right off of Highway 12 as you’re driving through town. Home to a wealth of paleontology displays including real fossils and a viewing window to a preparation room where fossils from local dig sites are cleaned, prepared and documented. The museum also has great displays on Native American history, the Old West and the cowboys, immigrants and others who made Lemmon what it is today.

Located 16 miles south of Lemmon, the Blacktail Trail is a 6.8 mile non-motorized trail for hiking, biking, and horseback riding.  Visitors can enjoy the scenic beauty of the rolling hills, wooded draws, buttes, and badland outcrops.  Fishing opportunities also await visitors at the trailhead! Stop by the Forest Service Office in Lemmon for more information.

Sculpted by local artist John Lopez the sculpture features many items unique to G.E.”Dad” Lemmon and Lemmon itself. You can find horseshoes, spurs, knife, and Army Colt .45 pistol, a bronze long horn head and many other memorabilia items from the local community.

A mural is also painted on the north side of the “Kokomo Inn” by Nigerian artists Dontun Popoola and Jonathan Imafidor. It is 150 feet long and 15 feet high and is a lasting image to G.E. “Dad” Lemmon, the founder of Lemmon.

This 9 hole grass greens golf course, is suitable for all ages and skill levels. Its located just 2 miles southeast of town on Airport Road.

On the corner of 5th Avenue W and Highway 12 the Lemmon City Pool is a great place to spend an afternoon.  Swimming lessons take place in June (Schedule & more info to come), and pool parties can be scheduled through the Finance Office at   605-374-5681.