We’re starting a new program called #K9ForADay. In partnership with the Humane Society of the Black Hills, we’ll be pairing up an animal in need of adoption with one of our officers during their daily duties, all in hopes of getting the featured pet adopted!

This month’s featured #K9ForADay is Suri. She’s a 2-year-old Shepherd mix who comes off shy at first, but warms up to people quickly.

Suri’s human partner today is Officer Darrius McMullin, who’s served with the RCPD for just over a year-and-a-half. Officer McMullin and Suri have teamed up for a few proactive foot patrols of our park areas.

Suri is currently up for adoption at the Humane Society of the Black Hills. If you’re interested in turning this #K9ForADay into your #K9ForLife, give them a call at 605-394-4170! 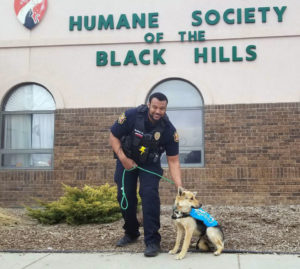