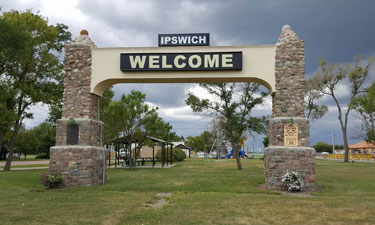 On October 2, 1883, the town known as Ipswich was platted on sections 27 and 28; during the BOOMS, or the railroad project as quoted by The Dakota Tribune. Growth was due to the Chicago, Milwaukee, and St. Paul railway extending its railway line west from Aberdeen 26 miles prompting the municipality of Ipswich to bloom. On November 1, 1883 the Board of County Commissioners changed the county seat to Ipswich due to the migration to the new city. Mr. C.H. Prior is responsible for the native name of Ipswich which originates from the British Isles. Trade was successful and sparked the city of Ipswich to grow and multiply. However with the completion of the Panama Canal traffic diminished in 1914, and by 1982 the main line was abandoned, was later purchased by the State of South Dakota and is now operated by Burlington Northern Railroad. 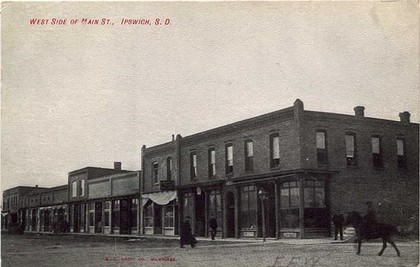 Historical west side of Main Street

The oldest operating community business is the Ipswich Tribune founded by A.B. Chubbuck and D.B Worthington in May of 1883 in the small community of Freeport.  With the construction of the railroad spirit from Aberdeen to Ipswich the two men relocated to the traffic of the populace. Shortly thereafter Mr. J.W. Parmley, a staunch businessman and nationally recognized for his energies as the President of the Yellowstone Trail Association, sought ownership of the publication.  In the spring of 1912 he spearheaded an idea to connect rural communities together with one main good road that stretched from Minneapolis to Yellowstone Park. The present US highways 12 and 10 follow the original route of the Yellowstone Trail.

Ipswich is commonly known as the home of the Yellowstone Trail, which gave way to the town tradition of Trail Days, first thought of by Warren “Everlastinglyatit Put” Putnam, a traveling hat salesman and South Dakota booster. The first celebration of “Trail Day” was held on Monday, June 19, 1939, promoted and sponsored by the Ipswich Commercial Club. Trail Days is held to remember the strife of settlement in Edmunds County, remember the dreams of pioneers such as J.W. Parmley who envisioned “a Good Road from Plymouth Rock to Puget Sound”, as well as bring the community of near and surrounding together.

All except the Pioneer Village and Memorial Arch are listed on National Registry of Historic Places due to the fact that those specific historical buildings have been moved from the original site of construction. All other historical buildings are still in places of origin.

Trail Days is the peak of summer entertainment in Ipswich, held each June.  Arts in the park is held in the Ipswich Library Park, food vendors set up downtown, a car show, and many more family events are offered.  Later on Saturday, head over to the Trail Days complex for concerts and watch the rodeo and mutton busting. Visit Trail Days Website

For more information on the Yellowstone Trail, click here.

The museum was the original home of J.W. Parmley, built in 1919.  J.W. Parmley is commonly known as the father of the Yellowstone Trail that extends from Plymouth Rock to Puget Sound and is now known as U.S. Highway 12.

The home is built of cement, brick and plaster, thought to withstand the many prairie fires that occurred during the early days of Ipswich.  The woodwork throughout the home is cherry wood.  There are two stone fireplaces, which include stones and sea shells from all over the world, collected by Parmley during his extensive travels.

Tours are available from June – September, on Wednesday, Friday and Saturday from 2 p.m. – 5 p.m.

The origins of the memorial arch date back to November 11, 1918 when the armistice was signed to honor those who fought in WWI. The arch was to be a monument to honor the valor of those who fought, gave their lives, or were fortunate enough to come home. The arch was to serve as a reminder to coming generations of youth of the part these men played in what was the greatest drama in our nation’s history.

The arch was first constructed across Main Street. The architect was Earl R. Perrin, an accomplished artist who had a vision with remnants of medieval, ancient, and modern times. On each of the pillars was a painted picture of a soldier of the Civil War and WWI. Its purpose was to honor the twelve men that lost their lives and J.W. Parmley, a noteworthy resident and the pioneer of the Yellowstone Trail.

The arch was later moved across US Highway 12 in 1922 due to the hustle and bustle of an ever-widening Main Street and traffic. Soon after the move to Highway 12 the arch was obliterated by a severe storm. The citizens of Ipswich were dedicated to erecting a new arch; the American Legion and Lions club were the appointed organizations to take charge of constructing a reinforced stone arch. C.J. Madison of Corpus Christi, Texas was known as an artistic stone mason and he was hired to construct the arch. The arch was to have stones collected from near and far; thus the stones used to reconstruct the arch were collected from all over the world and from each state in the US. The arch includes calcite crystals originating from the Badlands that were part of the collection of J.W. Parmley, a massive petrified bone that is thought to have been from either a mammoth or Triceratops, a stone from the Pyramid of the Sun found in a valley in Mexico as well as a meteorite from Biela’s comet. There are also stones from the Philippine Islands, Hawaii, and other Pacific Islands that were gathered by Loren Parmley during WWI. Additionally, stones such as quartz from the Homestake Mine and from the Mines of Idaho along the Yellowstone Trail were also used.

This building was dedicated on August 21, 1931 built by the heirs of Marcus P. Beebe as a memorial from his children. It stands as a permanent memorial to one of the first pioneer men of the Dakota Territories in 1881. The stone that was used to construct the architecture of the Marcus P. Beebe Library is native uncut granite rock found throughout the surrounding prairies of the Dakota Territory. The building is one large room, beamed ceilings, and seven foot high book shelves. The marble that can be found on the stairwell to the basement and the lobby is marble exported from Italy, Belgium, and Austria. There is gray Napoleon marble that leads the stairwell entrance to the library once inside the oak wood doors. The woodwork and furniture in the building is mostly oak; and was finished by Aberdeen Dakota Sash & Door Company.

Located on the south side of the entrance walk lays a five ton boulder that’s origins stretch to a farm south of Mobridge, South Dakota where the rock laid on a farm for as long as anyone can remember. The story says that long ago before the white man came to settle in the Dakota Territories, a deep path had been worn in where this rock originally laid accompanied by two sets of hand prints. The prayer rock is placed at the same incline in front of the library, just as it was in its original position overlooking the Missouri River.

The second building was the Owens Building purchased in August 1973, soon after the Schwall House was donated by the City of Ipswich. In 1976 a replica of the Congregational Church was also donated. The former Loyalton Post Office was purchased, moved and partially furnished by the Oscar Fredrickson family. The Ipswich Printing Press, an 1865 model, was donated by Mr. & Mrs. Jim Morlock, former publishers of the Ipswich Tribune. There have been further donations made by many people in the community and the City of Ipswich surely appreciates the efforts made.

Tours are available in the summer by appointment only. To schedule a tour contact Loretta Thares 605-426-6973.