Historic Bell to be Unveiled in Fort Pierre

Things to Do | 3 comments

Fort Pierre has always been full of rich history and one more piece of historic culture will be added on July 4th, 2019. Immediately after the 4th of July parade, Fort Pierre will dedicate the almost century-old country school bell. The bell was previously at the Orton Country School, Mission Ridge, 45 miles northwest of Fort Pierre from 1925 to 2015 when the school officially closed. Many local families attended this school including 9-time World Champion Casey Tibbs. The public is invited to attend this unveiling and with a donation you can ring this historic bell.

Local resident and rancher Brian Scott created a concrete base to create a pedestal for the bell. When the project is finished it will be seven feet high and weigh more than 600 pounds. A large forklift will place the bell and base to its’ final resting place in Fort Pierre properly located next to the Sansarc County School Museum.

The 4th of July parade begins at 10:00 am (central time) and is one of the most significant in the state. It is followed by the SDRA Rodeo and South Dakota’s largest fireworks display along the Missouri River.

The dedication will take place behind the log cabin on the corner of Hwy 1804/1st Street and Main Street in Fort Pierre. That day, the nearby log cabin, school museum, jail and railroad depot will be open and free to the public. 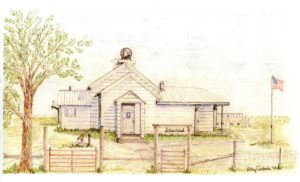