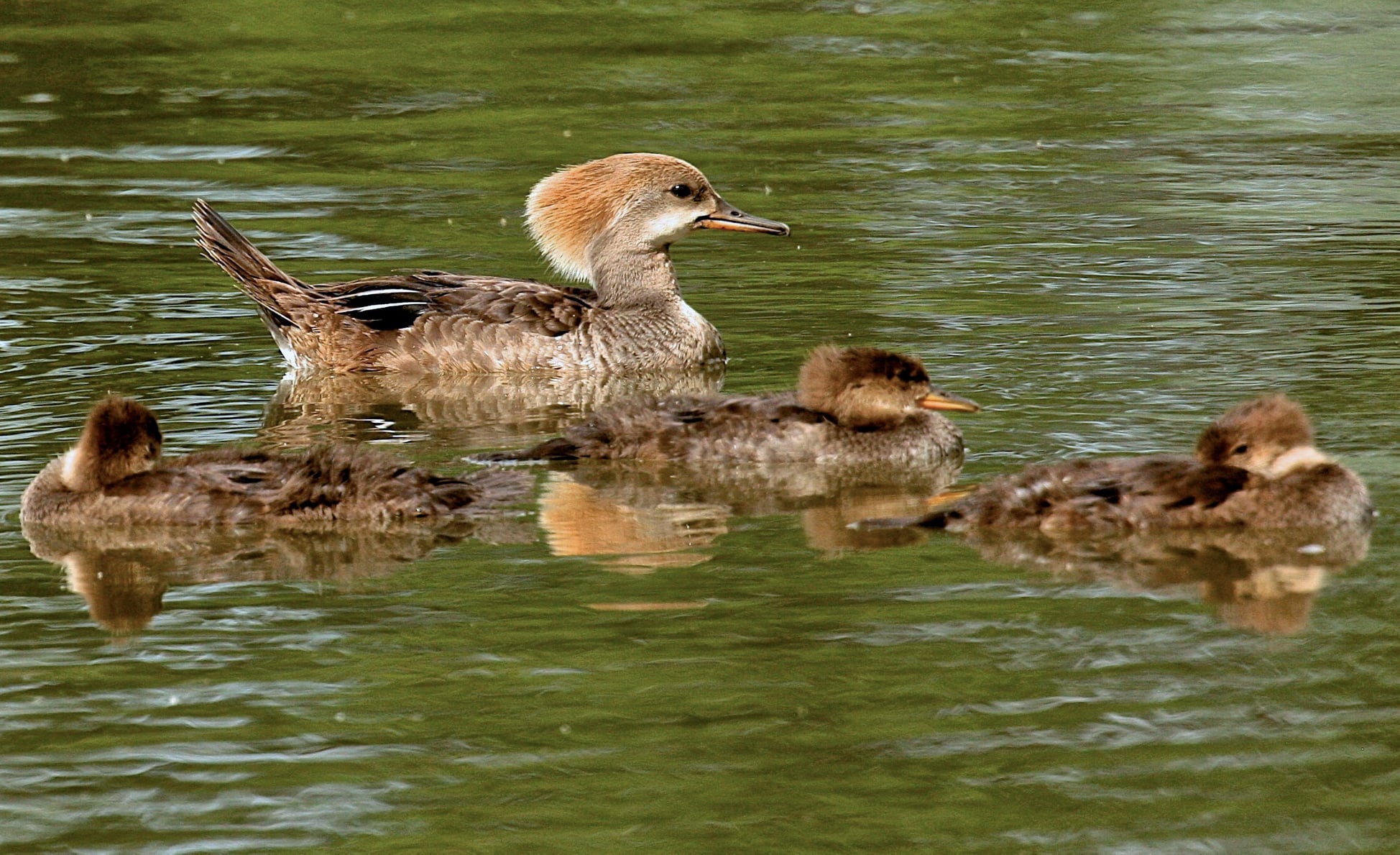 Ask an aquafarmer or a duck hunter what they think about mergansers and the reply might be so frosty that a hooded parka would be required to continue the conversation.

Fish ducks specialize in eating fish and are so horrid on a dinner plate that few are shot intentionally during the hunting season. Oh, there are a few folks who put on airs and say mergansers aren’t bad to eat. But they’re usually the ones who brag about eating the hottest, thermal-nuclear peppers or can somehow plow through the smell of lutefisk—an aromatic blend of outhouse and fish cleaning shed.

All three merganser species have splashed down on Great Plains lakes and ponds during their migration this spring. They are a flashy bunch. The drakes are handsome and the hens are elegant. I see the drakes through my binoculars, but I can’t get close enough to get a decent photo of them. Images of the three species here are of hens.

All mergansers are divers and have long, thin, serrated bills that hold a squirming fish tightly once it has been caught. They share the nickname “sawbills.” A brief look at each species:

COMMON mergansers, as the name indicates, are the most common throughout North America. They are slightly larger than a mallard and are our largest inland duck. According to the Cornell Lab, the word “merganser” comes from Latin and roughly translates to “plunging goose”—a good name for this very large and often submerged duck. The British call them goosanders. They are cavity nesters in the northern forests of the U.S. and southern Canada.

RED-BREASTED mergansers are the mid-sized of the three species. They are speed merchants in the air. The fastest duck ever recorded was a red-breaster that was clocked at 100 mph while being pursued by an airplane. They routinely clip along at 80 mph. Although not rare to the Midlands during the spring, they are considered uncommon visitors.

Red-breasters nest farther north than the other two species and nest on the ground near freshwater lakes, rivers, streams and marshes. They spend winters mostly on salt water. They must eat 15 to 20 fish each day, which means they must dive between 250 and 300 times, according to researchers.

HOODED mergansers are the smallest of the three. They nest in tree cavities, and the fearless hatchlings leap to the ground, which can be 50 feet below, after only one day in the nest. They nest farther south than the other two species and are most common in the Great Lakes region. They also nest in the upper Great Plains.

Hooded hens sometimes take the easy route and lay their eggs in other hooded nests. They lay about 13 eggs in a clutch, but nests have been found with up to 44 eggs in them. Breeding in Nebraska is uncommon, but not rare. The hooded merganser (first image) raised that brood in Lincoln’s Pioneers Park in 2020.

Red-breasters and common hens look similar, but a common has a more rusty head and dark eyes. The eyes of a red-breaster (the second image) are red.