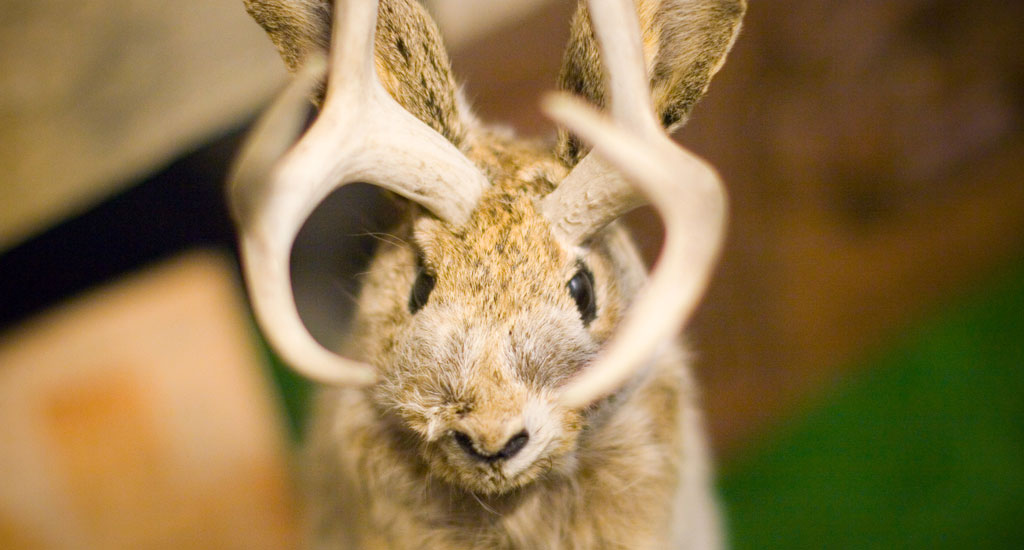 Everyone has seen one, I have seen many of them.  The most common siting is the “head and shoulder mount”.  A lucky few have seen the “full body mount” since those are a little more rare. I have seen some so old that the fur is coming off, an antler was missing and it was covered in dust. This tells me that they have been around for quite some time, a true native species to the Dakota’s. I did some research on this creature and I present my findings to you here. Are you wondering why I titled my blog “Fearsome Critter”? Well, The jackalope is a mythical animal of North American folklore (a fearsome critter). “In early lumberjack folklore, fearsome critters are fantastical beasts that were said to inhabit the frontier wilderness of North America.

Origins of the Jackalope

Douglas Herrick, creator of the “jackalope” — that curious critter with a jack rabbit’s body and an antelope’s antlers that could turn downright vicious when threatened yet sing a gentle tenor along with the best of the campfire cowboys —died Jan. 3, 2003 in Casper, Wyo. He was 82.

In the 1930s, the Herrick brothers — Douglas and Ralph, who studied taxidermy by mail order as teenagers — went hunting. Returning home, they tossed a rabbit into the taxidermy shop.

The carcass slid right up to a pair of deer antlers, and Douglas Herrick’s eyes suddenly lighted up.

Oh, did this peak your interest? Check out this site for more about Douglas Herrick and the Origins of the Jackalope

For about 30 years now, the 71-year-old Rapid Valley resident has been the exclusive provider of jackalopes to Cabela’s, the giant outdoor-themed retailer.

Just as Cabela’s considers itself the “world’s foremost outfitter,” English considers himself the world’s foremost jackalope-maker. He declined to say exactly how many he churns out, but he said it’s “multiple thousands” each year, and it exceeds the amount made by any competitor.

Making mounts of the mythical animals’ heads has been a full-time occupation for English and wife, Dianne, since he retired from the Air Force in 1981.

For more on this story, click here to read the article on the Rapid City Journal website.

Sadly the Jackalope in Mitchell lost it’s antlers back in 2009, so it became a Jack, minus the Alope. Recently in 2016 the antlers “grew back” and we now have a full blown Jackalope again. But that is not all. Since it has a saddle you can sit on it’s back and get your picture taken riding this mythical creature into the South Dakota sunset.