Andrew Carnegie, steel tycoon and philanthropist, is best known for his charitable contributions in financing public libraries. From 1886 until his death in 1919, Carnegie supported the construction of 1,679 public libraries across the United States. In South Dakota, twenty-five libraries were built through Carnegie’s charitable contributions. Deadwood would become the sixth South Dakota community to apply for and receive funds in the amount of $15,000 dollars for the construction of the Library.

Deadwood’s library would not have been possible without the hard work and perseverance of the Round Table Club and the Deadwood Woman’s Club. In 1899, these women’s literary groups joined forces to promote the creation of a public library. Within four years, ground for the new library was officially broke on March 28, 1904. Plans from Deadwood architect Charles A. Randall were adopted by the City Commission and called for a one story story building to be built in the Greek Style of architecture. An interesting exterior feature of the library included the white sandstone retaining wall from the Burke Quarry in Hot Springs, South Dakota. Prior to being placed in front of the library, the wall was on display in the South Dakota exhibit at the 1904 St. Louis World’s Fair.

On November 8, 1905, the library was officially dedicated in front of a large crowd of spectators. Deadwood Mayor Edward McDonald delivered a thought provoking speech on the importance of a public library and its benefit on the community. Today Deadwood’s Carnegie Library still continues to serve the Deadwood citizens and visitors in the capacity of a library, archives, and research facility. 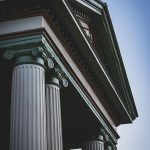 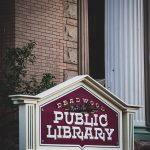 Historical library ground breaking photo in the banner is from the sign placed in front of the library.