The common whitetail or long-tailed skimmer (Plathemis lydia) is a common dragonfly across much of North America, with a striking and unusual appearance. The male’s chunky white body (about 5 cm or 2 inches long), combined with the brownish-black bands on its otherwise translucent wings, give it a checkered look. Females have a brown body and a different pattern of wing spots, closely resembling that of female, the twelve-spotted skimmer. Whitetail females can be distinguished by their smaller size, shorter bodies, and white zigzag abdominal stripes; the abdominal stripes of L. puchella are straight and yellow.

The common whitetail can be seen hawking for mosquitoes and other small flying insects over ponds, marshes, and slow-moving rivers in most regions except the higher mountain regions.

Like all perchers, common whitetails often rest on objects near the water, and sometimes on the ground. Males are territorial, holding a 10-to-30-metre stretch (33 to 98 ft) of the water’s edge, and patrolling it to drive off other males. The white pruinescence on the abdomen, found only in mature males, is displayed to other males as a territorial threat.

The nymphs are dark green or brown, but are usually found covered in algae. They feed on aquatic invertebrates such as mayfly larvae and small crayfish, and also on small aquatic vertebrates such as tadpoles and minnows. Because of their abundance, whitetail naiads are in turn an important food source for various fish, frogs, and birds, and also for other aquatic insects. 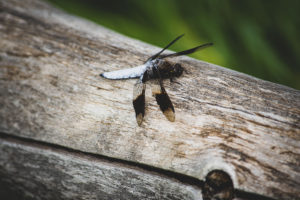