Check This Out, Historic Pierre and Fort Pierre Places | 0 comments 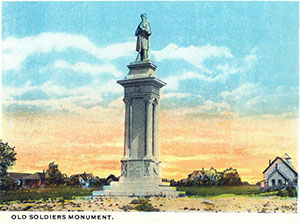 Supported by members of the Grand Army of the Republic, veteran’s organizations and citizens of the state, the 1913 Legislature granted permission to erect a monument dedicated to soldiers of the Civil War on the State Capitol grounds. Initially providing only $1000, the legislature, at the behest of then Governor Frank Bryne, appropriated the entire $10,000 cost of the monument in 1917.

(Photo above: A group of South Dakota veterans stands at attention during the 49th National Encampment of the G.A.R. at Washington, D.C., in 1915.)

The Grand Army of the Republic was a Union Army soldier organization whose membership honorably served between April 12, 1861 and April 9, 1865. Civil War veterans who settled in South Dakota establish communities and had various roles in helping to create the state.

The monument features a Union soldier wearing a forage cap and greatcoat and holding a Springfield rifle, with a bayonet, scabbard, percussion cap box, and cartridge box. It also feature symbols of the Army and Navy.

At the dedication of the memorial John L. Jolley, past department commander stated, “The greatest general, and the humblest private, in the ranks of our Army, all share equally, the honor bestowed on the Volunteer Army of the Civil War… The monument will be evidence of the duty we performed….”

The inscription on the monument reads, “ERECTED 1918 BY THE STATE OF SOUTH DAKOTA IN HONOR OF THE DEFENDERS OF OUR NATION.” 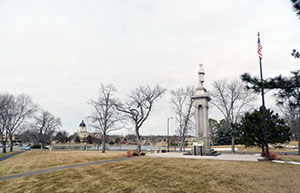 While the Civil War was fought far from here, we inherited the benefits of a united country and a dedication from those soldiers who relocated here and helped to create the State of South Dakota.