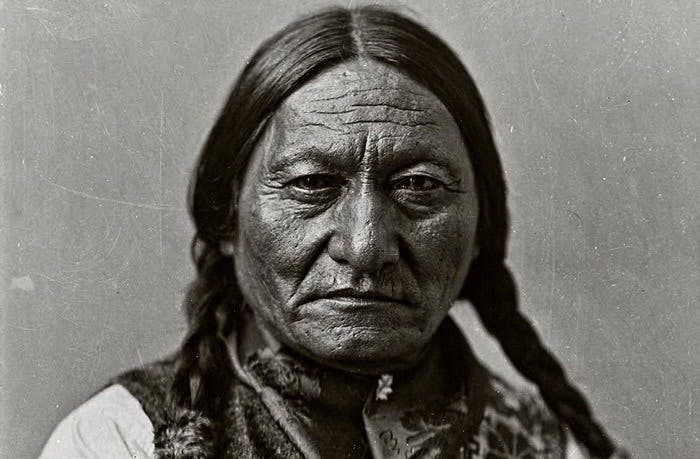 On July 20th this day in history 1881, Sitting Bull surrenders.

Five years after General George A. Custer’s infamous defeat at the Battle of Little Bighorn, Hunkpapa Teton Sioux leader Sitting Bull surrenders to the U.S. Army, which promises amnesty for him and his followers. Sitting Bull had been a major leader in the 1876 Sioux uprising that resulted in the death of Custer and 264 of his men at Little Bighorn. Pursued by the U.S. Army after the victory, he escaped to Canada with his followers.

Born in the Grand River Valley in what is now South Dakota, Sitting Bull gained early recognition in his Sioux tribe as a capable warrior and a man of vision. In 1864, he fought against the U.S. Army under General Alfred Sully at Killdeer Mountain and thereafter dedicated himself to leading Sioux resistance against white encroachment. He soon gained a following in not only his own tribe but in the Cheyenne and Arapaho Native American groups as well. In 1867, he was made principal chief of the entire Sioux nation.

In 1873, in what would serve as a preview of the Battle of Little Bighorn three years later, an American Indian military coalition featuring the leadership of Sitting Bull skirmished briefly with Lieutenant Colonel George Armstrong Custer. In 1876, Sitting Bull was not a strategic leader in the U.S. defeat at Little Bighorn, but his spiritual influence inspired Crazy Horse and the other victorious American Indian military leaders. He subsequently fled to Canada, but in 1881, with his people starving, he returned to the United States and surrendered.

He was held as a prisoner of war at Fort Randall in South Dakota territory for two years and then was permitted to live on Standing Rock Reservation straddling North and South Dakota territory. In 1885, he traveled for a season with Buffalo Bill Cody’s Wild West show and then returned to Standing Rock. In 1889, the spiritual proclamations of Sitting Bull influenced the rise of the “Ghost Dance,” an American Indian religious movement that proclaimed that the whites would disappear and the dead American Indian and buffalo would return.

His support of the Ghost Dance movement had brought him into disfavor with government officials, and on December 15, 1890, American Indian police burst into Sitting Bull’s house in the Grand River area of South Dakota and attempted to arrest him. There is confusion as to what happened next. By some accounts, Sitting Bull’s warriors shot the leader of the police, who immediately turned and gunned down Sitting Bull. In another account, the police were instructed by Major James McLaughlin, director of the Standing Rock Sioux Agency, to kill the chief at any sign of resistance. Whatever the case, Sitting Bull was fatally shot and died within hours. The American Indian police hastily buried his body at Fort Yates within the Standing Rock Reservation. In 1953, his remains were moved into Mobridge, South Dakota, where a granite shaft marks his resting place.