It took about a thousand people just 255 days to build the 114-mile Chicago, Burlington and Quincy Railroad between Edgemont and Deadwood using primitive methods. It took more than 15 years to complete the George S. Mickelson Trail on the same railroad bed due to the need to develop plans, reach consensus and obtain funding.

Railroad construction started in Edgemont on May 15, 1890, and was completed on January 24, 1891, in Deadwood. During that short time, the crew laid more than 100 miles of track, blasted four tunnels and erected more than 100 trestles.

The shortage of cargo and high maintenance costs ended Burlington Northern’s operation of the railroad from Custer to Deadwood on November 8, 1983, and from Edgemont to Custer on October 29, 1986.

In 1991, Governor George S. Mickelson dedicated the first six miles of the trail. After his untimely death in 1993, the trail was renamed to honor his tireless support and dedication to the trail.

The trail is a reality because of the cooperative efforts of the Burlington Northern Railroad, US Forest Service, SD Department of Game, Fish and Parks, SD Department of Corrections, SD Army National Guard, SD Department of Transportation, SD Parks and Wildlife Foundation, Friends of the George S. Mickelson Trail, National Rails to Trails Conservancy,  SD Mining Association and private donations. 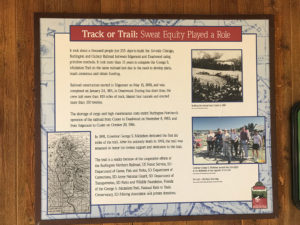 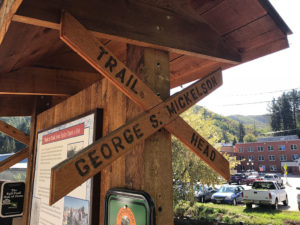 44° 22.211′ N, 103° 43.752′ W. Marker is in Deadwood, South Dakota, in Lawrence County. Marker can be reached from the intersection of Charles Street (CanAm Highway) (U.S. 85) and Cedar Lane, on the right when traveling south. Touch for map. Marker is located on the George S. Mickelson Rail Trail, just south of the trailhead and parking lot, on the south/east side of the trail. Marker is at or near this postal address: 32 Charles Street, Deadwood SD 57732, United States of America.