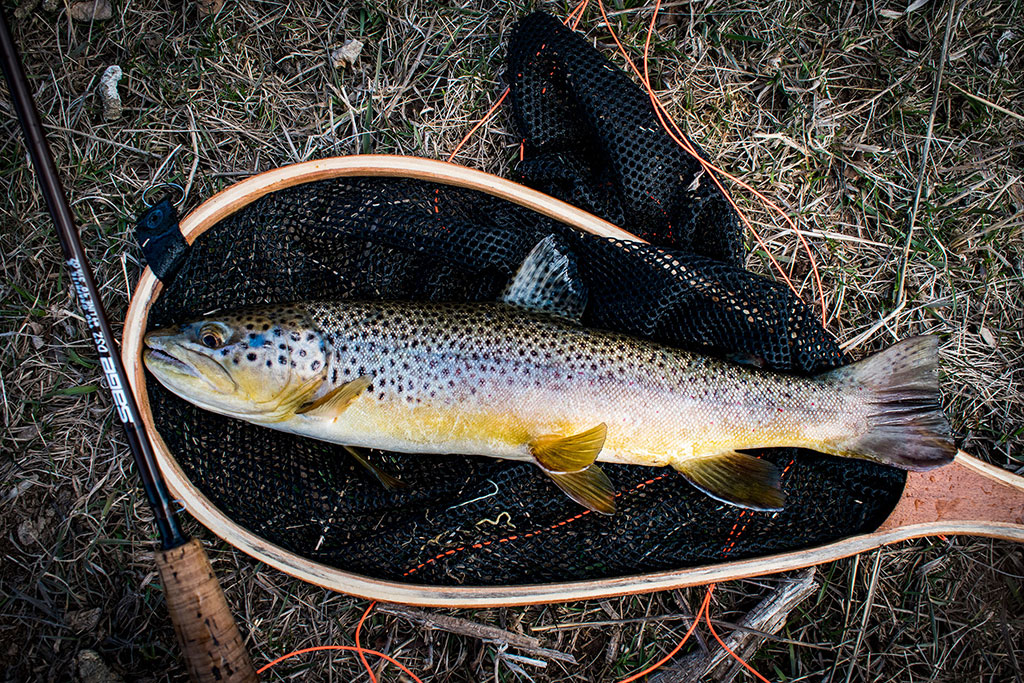 Brown Trout are the most abundant trout in Spearfish Creek. Like any fish in the early Spring when the water is really cold, they can be tough to catch. But once things start to warm up they are one of the most aggressive trout in Spearfish Creek, or pretty much anywhere for that matter. They will take almost any small fly but I prefer a beaded pheasant tail nymph and a strike indicator. Size wise in the canyon I have caught some up to 14 inches but most are around 10 inches or under. In the lower stretches of the canyon around Bridal Veil Falls, the flow is a little slower where as more towards Savoy the current picks up dramatically. I enjoy fishing in the faster and wider sections up towards Savoy where Iron Creek flows into Spearfish Creek. Here the fish tuck up close to the bank in the slower water and they seem to be less spooky since the faster current is making a lot more noise and it hides the noise of you walking a lot more than in those slower sections of the creek. There are still slower areas in this stretch where the creek makes a bend where some dry fly fishing would work too.

As Spearfish Creek passes through town it again picks up speed and can be a little challenging to fish. The numbers in town are lower than in the canyon, but size wise they are a little bigger. I use the same rig in town, strike indicator and a beaded nymph, the beaded pheasant tail being my go-to fly. If you learn to read the water you will find the trout in areas where the current breaks, whether it be a slow stretch close to shore, behind a larger rock or boulder, a bend in the stream where the fast water goes outside and creates a slack area inside or an eddy that catches food and swirls it around the trouts nose is always a good spot to cast your fly. Just remember, like a human a trout doesn’t want to work too hard for it’s food. I can’t imagine having to run on a treadmill while trying to get my hands around that juicy hamburger. So a trout doesn’t want to constantly fight the current wasting all it’s energy in order to get it’s meal.

North of the Interstate

As Spearfish Creek flows north of town and under the interstate it winds through pasture and ranch land and the Brown Trout grow quite a bit bigger. There are deeper holes which gives them more room to grow and I’m sure since there is lots of prairie grass along the creek the trout get to feed on grasshoppers and other insects that don’t inhabit the cooler canyon. I’m sure the water is a little warmer too since it has less tree cover and gets hit by the sun during the day a lot more than in the shady canyon. There are maybe more warmer water creatures for them to eat like leeches, crayfish, minnows and who knows maybe even mice that fall into the water. They could also be eating smaller trout too. I did see a Brown Trout in the canyon with a smaller trout in it’s mouth!

Out in this stretch the best route is to go with a gold beaded woolly bugger. They absolutely attack this fly so get ready for a fight. I have tried my usual strike indicator and beaded nymph out here but have only had slight interest from a couple bigger browns feeding in some slack water. When I switched to the woolly bugger it was like something flipped in their minds and they moved on the fly like a Cheetah on a Gazelle. As much fun as it is to catch bigger fish, there are not as many out in this stretch of Spearfish Creek and they only hang out in or near the deeper holes. So basically you fish a hole – catch one and move on – “spot and stock” fishing. It is fun but not as much fun as catching numerous smaller fish out in the canyon.