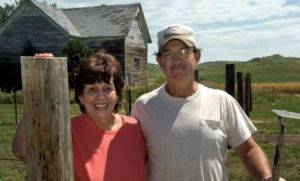 We are the last, proud remaining residents of Bijou Hills, South Dakota.

We have four children:  Lisa (deceased in 2016), Alana (Johnson), Christi and Wayne Jr.

Grandchildren: Ashley Paulsen, Zach Johnson, Kole & Kaleb Winterholler and Great-granddaughter Alexis Stephens. We receive many inquiries about Bijou Hills. Some want to know the history. Some want to know if they have ancestors buried here at the Union Cemetery. Some want to just remember the old days when Bijou Hills was alive and bustling. We’ve created this website for anyone seeking information, stories or who just wants to recall a simpler time in history. We hope you enjoy your tour.

The history of Bijou Hills runs deep. In the early 1900’s, my grandmother Ruth Surat recalls several things. In Bijou Hills she remembers a bank, hotel, blacksmith, grocery store, a Ford dealership, and a pool hall which her brother, Floyd Houska owned. Their father, Ed Houska, was the postmaster of Bijou Hills from Aug. 7, 1942 until Aug. 31, 1957. My great-grandpa was the last postmaster in Bijou Hills until the post office was discontinued in 1957. The mail was then sent to either Academy or Chamberlain.Nowadays, the structures in Bijou Hills are slowly diminishing. Buildings which have stood for nearly 100 years are now beginning to crumble as a result of age. Also in the past year or two, my Dad and I have been tearing down the old buildings to clear space. The structures in Bijou Hills that are still standing consist of my parent’s house, Grandma Ruth’s house and garage, the church, two trailer houses, and one old building my father and I have yet to tear down.

When Brule County Was Young….

The first settlement in Eagle Township was at the town of Bijou Hills, which was the name of the range of hills close by. About the year 1869, a Frenchman by the name of Proteau built a log roadhouse at this place and it was known as the Bijou Hills roadhouse until a post office was established and from that time on the name was Bijou Hills. The military road running to Fort Thompson, Fort Sully and other points up the Missouri River ran by the house. This road was also a part of what is known in history as the Missouri River Trail, which started at St. Louis, Mo., and followed the river for nearly its entire length, with branch roads leading to the Black Hills and other important places. For years this was the one of the most traveled roads in the Northwest.

Soldiers going back and forth between the forts, mule train hauling supplies for the forts, ox trans with freight for mining camps and settlements, adventurers and home seekers, all added to the travel over its trail. Roadhouses were built along the road where water could be had, and generally about a day’s journey apart. When the Bijou Hills road was built there was a large pond of water by the place, but this finally dried up and wells had to be used. On this trail, General Custer and his men traveled to the Black Hills, and later on to the Battle of the Little Big Horn.

Proteau’s wife was a negro woman by the name of Jane, and there were a number of kinky-haired children about the place. There were sheds for the oxen or horses, and always plenty of hay. Jane was a good cook, so that the Bijou Hills roadhouse became one of the most popular along the routes.

In 1873, Proteau sold out to a man named Jones, who with his quarter breed Indian wife, ran the place until 1877, when he sold to John R. Lowe, who with his wife Amelia, came from Brule City to make Bijou Hills their home.

The land was still a reservation so that all that changed hands was the buildings. Mr. Lowe improved the place, put in a stock of goods and obtained the post office. His brother, Charles Lowe, Sr., carried mail from Bijou Hills to Rosebud Agency, a distance of about 100 miles to the northwest, crossing the river at Rosebud Landing. He used ponies and a buckboard while the mail was brought to Bijou Hills by what was called the Wyoming State Line. It was equipped with fine stage coaches, called ͞White Tops͟ because the color, and generally were hauled by 4 good horses. These continued until the railroads put them out of business.

On July 6, 1882, Mr. Lowe had the present town site of Bijou Hills laid out and platted and lots were sold for different business enterprises.

The old roadhouse was abandoned except that for some time it served as a school house for the settlement. Boys and girls came a considerable distance, for school opportunities were scarce. A.I. Troth was the teacher and his son, Lyson G. Troth (who was later State Secretary of Agriculture) was one of the pupils. The building was also used for religious services, and other public gatherings. One of the most enjoyable occasions of those early days was a G.A.R. entertainment held at the old roadhouse to start a fund with which to erect a G.A.R. Hall. There was some very good talent among the boys. Robert Bayles, who was something of a singer and comedian, was the center of attraction.

The first patent to land in Eagle Township was issued to Samuel Boothby on April 20, 1882. This land is now owned by Anton Kott. Boothby Bros. were next to Lowes in making what was intended as a permanent settlement in the township. Their ranch was at the east end of the hills where John Duba and Anton Kott now live. They kept fine stock, but neither the Boothbys nor their cattle were used to blizzards. When the winter of 1880-1881 came, although they had plenty of hay, they were unable to get the cattle to the hay, or hay to the cattle, so when spring came they were so near out of business that they gave up ranching. They were not as ingenious as J.R. Lowe, who finding it impossible to get around with a team on account of the deep snow, sewed several cow hides together to form a large, flat surface, and fastened ropes to this. He and his hired man haled it over the snow to the nearest hay stack, and after loading on what they could haul, they pulled it over the snow crust to the cattle. This was continued until spring and in that way Mr. Lowe saved most of a large herd.