About the Monument in Deadwood

This monument is located in the Deadwood City Park next to the Deadwood Recreation Center (click here for google map location). The monument reads:

This ten inch shell was recovered from the Battleship U.S.S. Maine that was sunk in Havana Harbor, Cuba on February 15, 1898 and presented to the City of Deadwood in May 1912 in memory of the United States Sailors, Soldiers, and Marines who lost their lives as a result of the Spanish-American War 1898-1902.

About the USS Maine

USS Maine (ACR-1) was a United States Navy ship that sank in Havana Harbor in February 1898, contributing to the outbreak of the Spanish–American War in April. American newspapers, engaging in yellow journalism to boost circulation, claimed that the Spanish were responsible for the ship’s destruction. The phrase “Remember the Maine! To hell with Spain!” became a rallying cry for action. Although the Maine explosion was not a direct cause, it served as a catalyst that accelerated the events leading up to the war.

Maine was commissioned in 1895 as an armored cruiser, the first U.S. Navy ship to be named after the state of Maine. Maine and her near-sister ship Texas represented an advance in American warship design, reflecting the latest European naval developments. Her two gun turrets staggered en échelon, and full masts were omitted due to the increased reliability of steam engines.[2] Due to a protracted 9-year construction period, Maine was obsolete by the time she was completed.

Maine was sent to Havana Harbor to protect U.S. interests during the Cuban War of Independence. She blew up and sank on the evening of 15 February 1898, killing three-quarters of her crew. In 1898, a U.S. Navy board of inquiry ruled that the ship had been sunk by an external explosion from a mine. However, some U.S. Navy officers disagreed with the board, suggesting that the ship’s magazines had been ignited by a spontaneous fire in a coal bunker. The coal used in Maine was bituminous, which is known for releasing firedamp, a gas that is prone to spontaneous explosions. An investigation by Admiral Hyman Rickover in 1974 agreed with the coal fire hypothesis. The cause of her sinking remains a subject of debate.

The ship lay at the bottom of the harbor until 1911, when a cofferdam was built around it. The hull was patched up until the ship was afloat, then she was towed to sea and sunk. Maine now lies on the sea-bed 3,600 feet (1,100 m) below the surface. The ship’s main mast is now a memorial in Arlington National Cemetery. 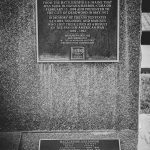 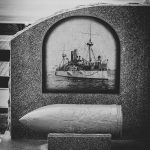 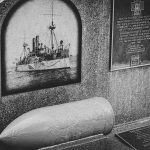