American Indians and the Buffalo

American Indians and the Buffalo

The Dakota, Lakota, and Nakota (Sioux) Indians used the buffalo for food. They also used it for clothing and shelter. Because the buffalo was so important, it had a special place in their religion. An old story tells that the Indians once lived underground. They called themselves Pte Oyate, or the Buffalo Nation. One day, they came to the surface to live. Here, life was hard. A holy man named Tatanka came to them as a buffalo. He gave the people everything they needed. Today, one Indian name for the buffalo is tatanka.

The buffalo moved in herds. The Dakota, Lakota, and Nakota people had to move with them. They lived a nomadic lifestyle. They followed the buffalo to new grasslands or pastures. Hunting was hard before white people brought horses to the Americas. Most of the tribe had to help hunt the buffalo. The people would herd the animals into a canyon or corral. Hunters killed the penned animals. One of these ancient “kill sites” is found near the town of Buffalo, South Dakota. Read more here, at sd4history.com 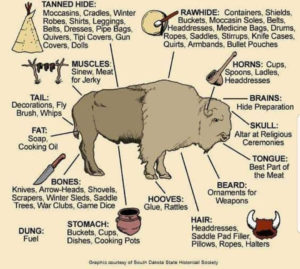