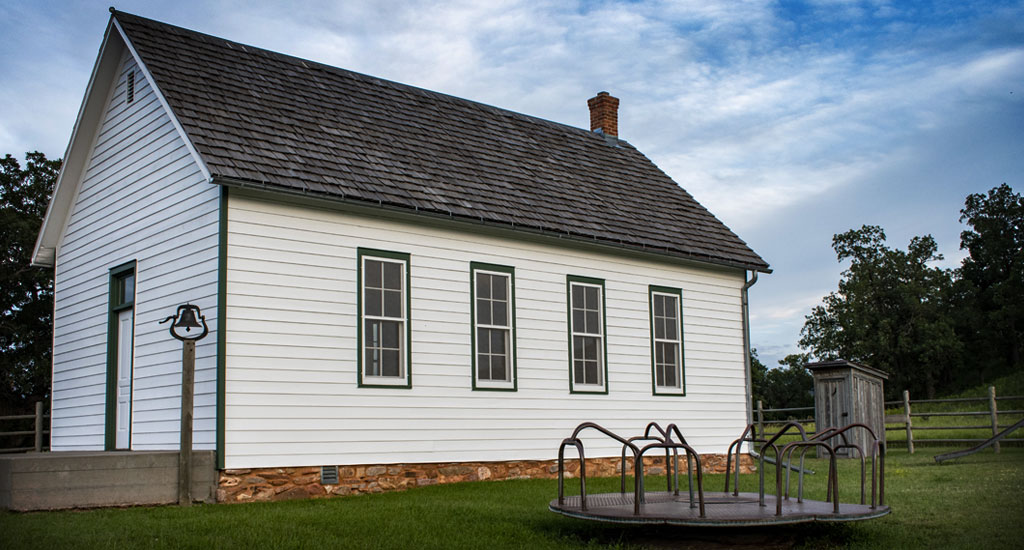 Could you imagine attending school when all eight grades were combined into one-room? A giant potbelly stove sitting in the back of the room keeping the room nice and toasty during those cold Dakota winters. I’m willing to bet the back of the room was probably hotter than you know what, and the front of the classroom was colder than you know what. Writing out all your math problems using slates and chalk. Passing a note that you wrote using feather pens and ink. Oh yeah, and no electricity or running water. Just writing this has a wave of guilt passing through my body. I had to walk to school when I was a kid – elementary, middle and high school. Oh sure, we lived only a few blocks from each school but hey, I walked!

Each year second grade school children from the Spearfish area get to experience what it was like to attend school back in 1880. They get to dress in period clothing, play Red Rover, and have sack races with their friends. Those were the days!

The original desks, blackboard, and stove remain in the original building, which was closed as a school in 1936. After its use as a school, the Centennial Valley Schoolhouse was used as a polling place for voting or for scripture services.

In the 1960s, mandatory school reorganization took place, and all small rural school districts in the area became part of Spearfish School District. The school district approached Henry Frawley II to ask what he would like to do with the building, and he bought it for $100. Then, around 2004, the city of Deadwood shared some of its restoration funds, and a matching $25,000 grant was awarded to restore the building to its original condition, complete with original furniture, wall colors, and desks.

Several matching grants have been given to the Frawley Ranch by the Deadwood Historic Preservation Commission and the South Dakota State Historical Society to assist in the restoration of its historic buildings, including the schoolhouse.

Visit the Black Hills Pioneer to read a good article on the Centennial Valley Schoolhouse.