Thank you to Lyra Radford for letting me re-post her article. Visit Lyra’s website at www.unsettlingthings.com

Rich with history and littered with lore, ghost stories from South Dakota have risen from the oral traditions of the Lakota Sioux Indians who have inhabited much of the land for centuries. The majority of South Dakota urban legends evolved from weird Native American creatures and stories. Historic landmarks, ancient burial mounds, and otherworldly forests pepper the state’s terrain.

Much like urban myths from Arizona and various other states, South Dakota’s lore and horrors includes fabled beasts, real-life murders, evil entities on the hunt for souls, and more ghosts than one could ever possibly catalog. There’s even an urban legend about the infamous Jesse James jumping over an ridiculously wide ravine while evading capture. From the impossible to the spine chilling, this list explores some of the myths and ghost stories that make up creepy South Dakota.

The Gitchie Manitou is a nature preserve just southeast of Sioux Falls, South Dakota, in the northwestern corner of Iowa that many believe is haunted. It has ancient Native American burial mounds, has witnessed the murders of four teens, and has been the site of the rape of an adolescent.

In November of 1973, five teens from Sioux Falls, South Dakota, went out camping in Gitchie Manitou. The unsuspecting group was sitting by a fire with some marijuana when suddenly, a shotgun went off. Roger Essem, 17, was killed instantly by brothers Allen, David, and James Fryer, who descended on the group, pretending to be cops. They separated the remaining three boys from the only girl, 13-year-old Sandra Cheskey, and placed the girl in the back of their truck.

Then, the Fryer brothers lined up Stewart Baade (15) with his little brother, Dana Baade (14) and friend, Michael Hadrath (15) and executed them. Cheskey was kept alive and raped by James Fryer. She later identified the attackers and testified against them. They were sentenced to life in prison but locals on both sides, Iowa and South Dakota, believe their heinous crimes still haunt the Gitchi Manitou. 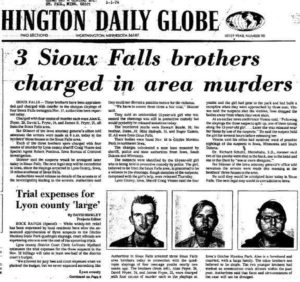 The Legends Of Sica Hollow

The Dakota Sioux Native Americans once hunted in the forested ravines known as Sica Hollow – that is, until they realized it was haunted and put a warning in its name. Sica means ‘evil’ and there are several legends that have come out of this State Park.

It’s believed evil is steeped into every nook and cranny of this area, which is why the water runs red in the Sica Hollow springs – nevermind the mineral content, it’s pure evil. The path referred to as  ‘The Trail of Spirits’ has bubbling red bogs and was believed by the Sioux to be the flesh and blood of their ancestors. Between all the red water, swamp gas, and tree stumps glowing in the dark, it’s no wonder they thought the place was evil. Perhaps they were right.

There was a rash of mysterious disappearances in the 1970s, paired with sightings of a half-man-half-beast similar to Bigfoot in those woods. Even today, visitors have claimed to see the spirits of Indians in addition to hearing voices, war cries, and chanting. Maybe those bogs really did consume the flesh and blood of the Sioux tribe’s ancestors. 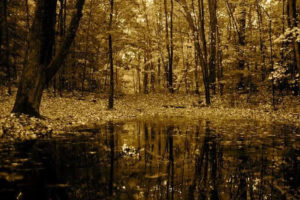 The Pine Ridge Indian Reservation has had an alarmingly high suicide rate amongst their youth and it’s believed an urban legend is responsible. The land is being stalked by an evil, ancient entity that takes on the form of “Walking Sam.” Like the “Tall Man,” “Slenderman,” and the long feared “Stick men,” this creature feeds on the living, infecting their minds and altering their thoughts.

In the case of Walking Sam, his evil bidding is collecting the souls of suicides so he doesn’t have to wander the earth alone. He convinces the already lost, depressed, or hormonal adolescents that they aren’t worthy of life and that they should end it. He stands around seven feet tall, has no mouth, and has gangly limbs. When his arms are outstretched, you can see the bodies of Lakota men and women hanging from them.

Since December of 2014, Pine Ridge has had 103 suicide attempts with nine people succeeding. The youngest was only 12 and the oldest was just 24. There have even been attempts at mass suicides on the grounds. Thankfully, church leader Pastor John Two Bulls discovered and prevented one of these plans from being carried out. He and a few other adults found a group of teenagers with nooses already hanging from the trees.

Another group of teens, all female, tried to carry out a similar plan but were stopped in time. Why are they doing it? Tribe leaders, clergymen, local mental health professionals, and law enforcement are scratching their heads. What, if not some great evil, is infecting the minds of so many young people in Pine Ridge? Is it poverty? Is it abuse? Or is it the creature kids call Walking Sam? 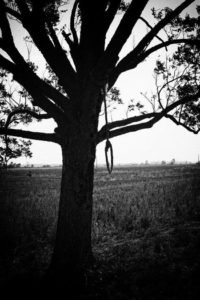 A famous ghost in Rapid City, South Dakota, is Hooky Jack. In life, his name was John Leary, but after a mining explosion in the 1800s, he lost both of his arms and one eye. His arms were replaced with hooks, hence the nickname Hooky Jack. He became a Rapid City police officer, but tragically died after being struck by a car in 1926. Now, his spirit is said to haunt his former residence, which has since been converted into a tavern.

According to legend, Hooky Jack lived on the third floor and can still be heard roaming up there today. Employees don’t even want to venture to that floor unless they absolutely must – many employees have even refused to work the closing shift alone. Voices, rattling, and eerie sounds can be heard upstairs at night.

Strange flashing lights and spirit orbs have been caught on the proprietor’s security footage. Multiple witnesses have seen chairs, tables, and the billiard balls moving around the table on their own. A few bartenders claim to have seen a figure sit at the end of the bar out of the corner of their eye, only to look up and realize there’s no one there. 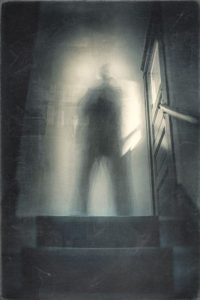 The historic Bullock Hotel in Deadwood, South Dakota, was built between 1894 and 1896. It’s a pretty famous haunt and has been featured on shows like Unsolved Mysteries and the Travel Channel’s Ghost Adventures.

The original owner, Seth Bullock, who was also the first sheriff of Deadwood, haunts the hotel. A slew of people have heard his boots thumping steadily down the halls and smelled the scent of his favorite cigars wafting through the air. The cellar, where Seth’s Cellar Restaurant is located, is said to see the most paranormal activity. Restaurant staff have heard the eerie sound of a piano playing ragtime and glassware is often shattered after being flung through the air by an invisible force. 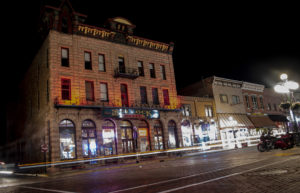 Known to locals as Spook Road, this eerie stretch just outside of Brandon, South Dakota, has quite the collection of creepy occurrences under its belt. Winding through tunnels, running over bridges, and lined in trees, locals claim this road is especially unnerving in the fall and winter months.

One urban legend state’s that driving in one direction will take you over five bridges, but on the way back, you’ll only cross four. Allegedly, suicide victims can still be seen hanging from both the bridges and the trees, their bulging dead eyes watching you as you cross in horror. Some folks say apparitions have suddenly appeared on the road in front of them, only to vanish just as quickly as they came. 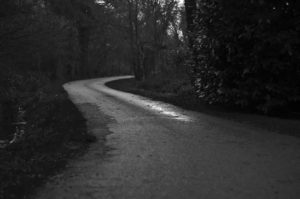 In Sioux Falls, South Dakota, sits the historic Orpheum Theater with its very own ghost. The spirit, fondly referred to a “Larry,” may or may not be the ghost of an actor who disappeared during a dress rehearsal many years ago. Allegedly, the sound of a gunshot rang out from the light booth, but when his fellow actors ran up to investigate, all that remained was a pool of blood and no body was ever found.

The Orpheum Theatre first opened in 1913, but changed hands in 1954. The new owners allegedly found a casket in the boiler room, but when they came back later to clean things out, the casket was gone. Reports of strange noises and sightings of a shadow figure became common in the old theater and one of the more intriguing reports happened in 1959.

Actor Ray Loftesness became one of many to see this shadow man on the balcony. On that particular night, he said Larry was illuminated by the green and blue lights and was pointing directly at him. Loftesness claimed he was hit by a icy blast of air. Twice that night, he was assaulted by falling sandbags and was even knocked unconscious. Larry clearly had it out for the guy. 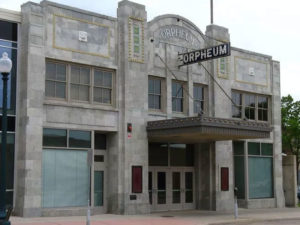 The Legend Of The “Little Devils” Of Spirit Mound

The Spirit Mound near Vermillion has been long feared by Native Americans. They wouldn’t dare go near it because of the legend of the “little devils” who guard the mounds, attacking anyone who tries to climb them with magic arrows. The legend was first documented 1804 and tells of the massacre that makes the mounds taboo today.

Somewhere around the mid 18th century, hundreds of Indian warriors allegedly attempted to rid the world of the evil little creatures, but it was they who ended up slaughtered instead. So now, they stay away and leave the mounds to the little devils. 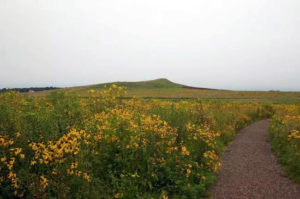 The Easton Castle, also known as the yellow brick house, was built sometime between 1889 and 1890 in Aberdeen, South Dakota. This 30-room, three-story, Queen Anne-style mansion was covered in yellow bricks in 1902 when Carroll Francis Easton took ownership. The housekeeper of this massive home just so happened to be Leslie Gage, the niece of L. Frank Baum, author of The Wizard of Oz.

Gage was the inspiration behind Dorothy. Rumor has it, this muse of a housekeeper haunts the third floor and has been seen all throughout the home. According to the whispers of busybodies of the time, the Easton’s son became a little mad and reclusive after the death of his parents, hiding away in the old house that was now believed to be haunted. He didn’t maintain the property and its unkempt appearance only added to the lore of ghosts and curses swirling around the property.

The mansion has your standard haunting tales like footsteps, creaking stairs, and disembodied voices, but apparently there’s also a knife-wielding psycho spirit that chased one person out of there. 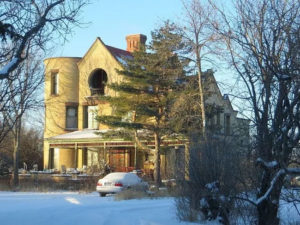 The Legend Of Jesse James At Devil’s Gulch

One of the most famous urban legends in South Dakota happened in the town of Garretson. According to local lore, infamous outlaw Jesse James successfully evaded capture in 1876 by leaping over the Devil’s Gulch on horseback. Keep in mind that the Devil’s Gulch is a ravine that runs 60-feet deep and is 20-feet wide. Jumping over something that massive without spooking a horse is highly improbable, and most historians would say it’s impossible, but that doesn’t stop locals from swearing it happened. 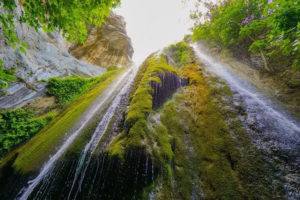