Frogs on a Fly

Check This Out, Fishing in South Dakota

I am sitting here watching giant snowflakes slowly coming down. I haven’t gone fly fishing in a month or more. I thought this would be a good time to do some writing. Everyone has a fishing story, your very own journey. I have memories “bobbing” around in my mind. The memories come to the surface, and they disappear again for a spell. My plan is to put down in writing some memories, just in case the “bobber” in my mind goes down and doesn’t come back up if you know what I mean. This is my story about Fly Fishing. 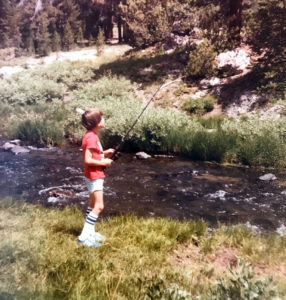 Me fishing a stream back in 1981 on our vacation to Yellowstone Park and the Black Hills.

I always had a fascination with mountain streams. Mom and Dad took us on a family vacation to Yellowstone Park and then through the Black Hills. Dad would pull the car over by a stream and we would get to fish a little and do some exploring. we used a regular fishing pole, and dad probably had it rigged with a hook and a salmon egg. I could stand there for hours staring into the crystal clear water flowing around the rocks. The stream was beautiful and mysterious. Even though I didn’t catch or see any fish, I just knew they were hiding in there somewhere. Later on we would take trips out to see my sister Julie and uncle Tom in Red Lodge, Montana and later they moved to Kila, Montana. There were now more streams to explore and my fascination with trout grew.

If this were a Hollywood script I would go on telling you that during this time is when I learned to fly fish, and that I went on to fish every Blue Ribbon trout stream in the country. I would flash images of that old man out in a stream fly fishing at the end of A River Runs Through It. Well, that’s not how things started out for me.

I got my first fly rod when I was 10 or so, and it was likely a fly rod kit from Kmart in Bismarck. I remember trying to cast it in the front yard lawn, and I remember it being very frustrating. Being a kid with very little patience and with no YouTube training videos at my disposal, my fly fishing career was in jeopardy. I had those visions of cold, crystal clear trout streams bobbing around in my head from our vacations and trips to Montana, but growing up in Beulah, ND with our dirty Knife River and Lake Sakakawea teaming with walleye, the odds of getting seriously into fly fishing were slim – at least for trout.

My first recollection of actually trying out my fly rod was at a place north of Beulah called the Mine Hills. Back in the day they mined for coal in the area and the dirt removed to get to the coal created the “hills”. After the mining shut down, they left the deep holes to fill with water creating a handful of different sized and shaped ponds. They stocked the ponds with bluegill, perch, largemouth bass and trout.

On this particular trip out to the Mine Hills I brought along my new fly rod. I had it rigged up with a “fly”. If you want any more details you won’t get them here. It looked “bug like” and with any luck when I would place it on top of the water a fish would get fooled into thinking it was food. I had no clue what type of fly line was spooled up on the real. Didn’t know about tippets, leaders or anything useful. I couldn’t even cast the thing 10 feet! But there I was, my first fly fishing trip.

I remember the day being very hot. The sun was beating down. It was not the best time of the day to be fishing but when you are a kid who cares, right? We gave it our best shot but the fish were not biting. I’m sure we started to lose interest, and started to goof around a little bit too. I recall there were frogs sitting everywhere on the thick weeds that carpeted the shoreline. Now, frogs were a big part of our childhood. At our Grandparents farm north of Halliday, ND, we would catch frogs down by the “Woods” all day long. Big frogs, little frogs, green frogs, and brown frogs. The frogs would venture out of the water into the grass that the cows had mowed down. As we walked along the creek, the frogs would be hopping out of the way, and with no water nearby, they were easy to catch. So, with all my knowledge of frogs, and knowing what frogs like to eat. The next logical step was to use my new fly rod to catch some frogs.

So there you have it. My first catch with my new fly rod was a frog. Taking advantage of the long fly rod I could easily reach out and dangle the fly above the hungry frogs without spooking them. Like a true fly fisherman, I perfected my approach. By slightly twitching the tip of the fly rod, I would have the fly dancing like a mosquito above their heads. I was hooking and unhooking frogs by the dozens. I had frogs jumping a foot in the air grabbing my fly. Gosh, that was fun.

Unfortunately, my fly fishing career took a dramatic turn shortly after that. My fly rod got tossed aside in the garage somewhere, only to return sometime later to be used as a jigging rod for walleye on Lake Sakakawea. But that is another story…