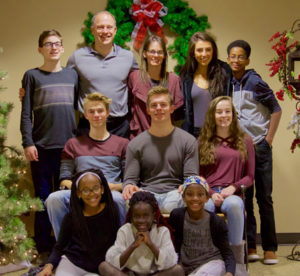 Mike and his wife, Kim, have nine (9) children including four (4) adopted from Ethiopia and Uganda.

The South Dakota Governors Prayer Breakfast will be held beginning at 6:20am on Thursday, January 24, 2019 at the Pierre Ramkota.  The breakfast will conclude by 7:45am.

The Prayer Breakfast is an interdenominational event centered on Jesus Christ as the Savior of the world and is intended to promote His glory. The breakfast is loosely modeled after the annual National Prayer Breakfast in Washington, DC.  People of all faiths and professions are welcome to attend.

Note from the Breakfast Committee:  Due to the unexpected loss of air service to Pierre this week, we are unable to get our scheduled speaker, Skip Li, here for the breakfast.  God has been faithful and brought a new guest speaker to us from Canton, SD!  Mike Adams is the Founder and President of Adams Thermal Foundation (ATF). Mike also chairs the Foundation Board and is responsible for the strategic direction and overall operations of ATF.

Mike dedicated his business to God and began giving to many God-honoring causes. In 2013, God called Mike to do more than just give. God challenged Mike to take over full-time responsibility for the futures of 900 at-risk children in Ethiopia – even while his business struggled under the weight of a declining ag machinery market. He is coming to the breakfast to give testimony to God’s faithfulness and to share with us what happened next.

Mike and his wife, Kim, have nine (9) children including four (4) adopted from Ethiopia and Uganda.

This website uses cookies to improve your experience while you navigate through the website. Out of these, the cookies that are categorized as necessary are stored on your browser as they are essential for the working of basic functionalities of the website. We also use third-party cookies that help us analyze and understand how you use this website. These cookies will be stored in your browser only with your consent. You also have the option to opt-out of these cookies. But opting out of some of these cookies may affect your browsing experience.
Necessary Always Enabled
Necessary cookies are absolutely essential for the website to function properly. This category only includes cookies that ensures basic functionalities and security features of the website. These cookies do not store any personal information.
Non-necessary
Any cookies that may not be particularly necessary for the website to function and is used specifically to collect user personal data via analytics, ads, other embedded contents are termed as non-necessary cookies. It is mandatory to procure user consent prior to running these cookies on your website.
SAVE & ACCEPT
Loading Comments...